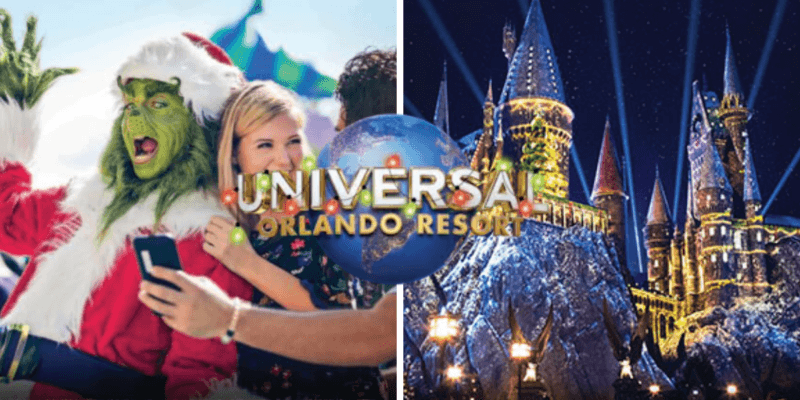 Universal has announced its Christmas offerings for this year and we are filled with holiday cheer!

While the holidays have been up in the air this year for theme parks due to setbacks caused by the coronavirus pandemic, we are surprised and delighted to see what Universal has planned for Guests this year.

You can see our coverage of the Christmas decorations that are already going up around Universal Orlando Resort here!

Running from November 14 through January 3, all of your holiday favorites at Universal are back! Experiences include the Universal Holiday Parade featuring Macy’s, the Grinch, and much more!

Here is Universal’s official announcement about their 2020 Christmas offerings:

Put a little mischief in your merry when Universal Orlando unwraps a resort-wide celebration that will elevate your season.

Experience Christmas in The Wizarding World of Harry Potter™ as Hogsmeade™ and Diagon Alley™ are transformed with wondrous spirit. Treat yourself to Universal’s Holiday Parade featuring Macy’s. And watch the live retelling of Dr. Seuss’s classic holiday tale starring The Grinch™ in the Grinchmas Who-liday Spectacular.

What could be more magical than spending Christmas inside the Wizarding World of Harry Potter? Set between two parks, here are the offerings you can expect to find this holiday season at Universal Orlando Resorts Wizarding World,

In Universal Studios Florida, Diagon Alley™ and London are transformed with festive décor and brilliant lighting. There are special holiday treats and drinks, the atmosphere is brimming with excitement and Celestina Warbeck and the Banshees have a special show prepared just for the occasion.

In Universal’s Islands of Adventure, Hogsmeade™ embraces the holiday spirit as the shops are festively decorated with garland and lights. The Frog Choir sings seasonal melodies and there are special treats and drinks to share. As the stars begin to shine, revel in a dazzling projection of holiday spirit at The Magic of Christmas at Hogwarts™ Castle unfolds.

They also shared more details about the entertainment:

The streets of Hogsmeade and Diagon Alley will become beautifully adorned with themed decorations, garlands and lights as the sounds of special holiday-themed performances fill the air throughout the lands. Guests can hear both magical and Muggle Christmas carols from the Frog Choir comprised of Hogwarts students and their giant croaking frogs, as well as the unique holiday hits of one of the wizarding world’s most popular singing sensations, Celestina Warbeck and the Banshees. There will also be seasonal treats, holiday eats, and beverages – including the highly-anticipated return of the fan-favorite, hot Butterbeer.

The fan-favorite Grinchmas celebration will be in full swing at Islands of Adventure inside the Suess Landing area of the park. Watch the stage production of the retelling of this Christmas classic, or have a picture with the Grinch himself!

During the holiday season, Seuss Landing™ is decorated with the holiday charm and cheer of Dr. Seuss’s Who-ville. Your heart might grow three sizes as you delight in the hilarious hijinks of The Grinchmas™ Who-liday Spectacular, a live retelling of the classic tale starring the Grinch™, featuring music recorded by Mannheim Steamroller.

You’ll even have the opportunity to meet the maven of mischief himself for an autograph and, if you’d like, purchase a photo of yourself with him. 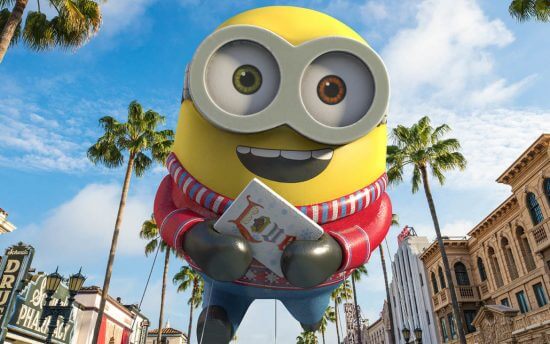 Over at Universal Studios park get ready to see the most magical parade featuring Macy’s! You may even see Santa himself!

New this year, guests will have the opportunity to get up-close with larger-than-life parade balloons and floats like never before during “Universal’s Holiday Experience featuring Macy’s Balloons.” Guests will stroll along a picturesque pathway where they’ll encounter elaborate floats and stunning balloons inspired by everything from iconic holiday staples like reindeers and the Nutcracker, to characters from popular animated films, including the mischievous Minions from Illumination’s “Despicable Me” and “Minions” films, Gingy, The Gingerbread Man, from DreamWorks Animation’s “Shrek” movies and the penguins from DreamWorks Animation’s “Madagascar” franchise. And it all culminates with a special appearance by Santa Claus and the opportunity to take a socially-distanced portrait with the big man himself.

Holiday Tree Hunt: Guests who purchase the Holiday Tree Hunt will embark on a search for 16 holiday-themed trees scattered throughout various merchandise locations in the theme parks and CityWalk. Guests will receive a brochure that outlines the participating locations, where they’ll have to collect stamps to mark their visit to each stop. Those who successfully complete the entire hunt will receive an exclusive Holiday Tree Hunt-branded ornament.

Holiday Treat Trail: Guests can participate by grabbing a complimentary Holiday Treat Trail brochure that outlines a list of specialty food and beverage menu items across select dining venues. Those who purchase all qualifying items will receive a special sweet treat.

Walt Disney World Resort will also begin their holiday offerings on November 6. However, they have been modified due to the pandemic. You can read all about what Disney is offering for Christmas entertainment here.

What are you most excited to see at Universal this Christmas? Let us know in the comments!

Let us help you plan a perfect holiday getaway to Universal Orlando Resort!