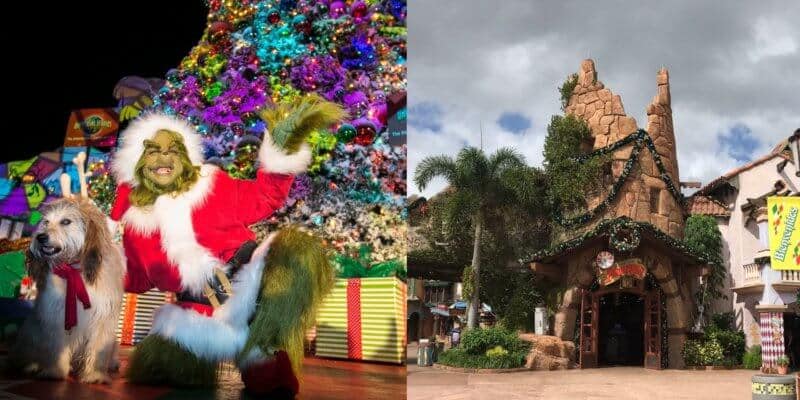 It’s beginning to look a lot like Christmas over at Universal Orlando this spooky season, with holiday decorations already up at Universal’s Islands of Adventure.

Before we are even able to let out that final scream from Halloween Horror Nights Lite, Universal already has us singing Christmas songs with the Whos! Yesterday, Theme Park Express took to Twitter to showcase the new holiday decorations that wrap the Port of Entry at Islands of Adventure.

If you take a look at the photos below, you can see the festive garland has been perfectly draped across “the adventure begins” arch, as well as the surrounding buildings within the theme park entrance. The choice to begin decorating the theme park from the entry way is an interesting one because his means that during the Halloween season, guests will be greeted by candy canes and holiday cheer!

Some Christmas decorations are already up in Port Of Entry at Islands Of Adventure @UniversalORL pic.twitter.com/2b2owOxCwO

That being said, it is very exciting to see decorations begin to fill the parks at Universal Orlando! With Halloween Horror Nights Lite displaying both of its houses at Universal Studios, Islands of Adventure never really had the Halloween spirit going on, so guests are not missing out on any spooky offerings with the new decorations. If anything, this little holiday ‘Easter Egg’ has guests like myself very excited to be at Universal Orlando this holiday season.

Although decorations may be up, the actual Christmas and holiday season will officially begin on November 14 at Universal Orlando and run through to the January 3, 2021. The parks will be celebrating the holidays through the Wizarding World of Harry Potter, Grinchmas, the Macy’s holiday parade, and characters dressed in Christmas cheer, with decorations filling the parks.

Put a little mischief in your merry when Universal Orlando unwraps a resort-wide celebration that will elevate your season.

Experience Christmas in The Wizarding World of Harry Potter™ as Hogsmeade™ and Diagon Alley™ are transformed with wondrous spirit. Treat yourself to Universal’s Holiday Parade featuring Macy’s. And watch the live retelling of Dr. Seuss’s classic holiday tale starring The Grinch™ in the Grinchmas Who-liday Spectacular. Come, stay, and celebrate the season at Universal Orlando Resort.

And if you are anything like us at ITM, imagining how Hogwarts will look once lit up for the holidays is definitely making us merry and bright!

Do you think it’s too soon for Christmas and holiday decorations? Or are you ready for The Grinch to come ruin your Christmas?

Comments Off on Christmas Decorations Are Now Up At Universal Orlando!