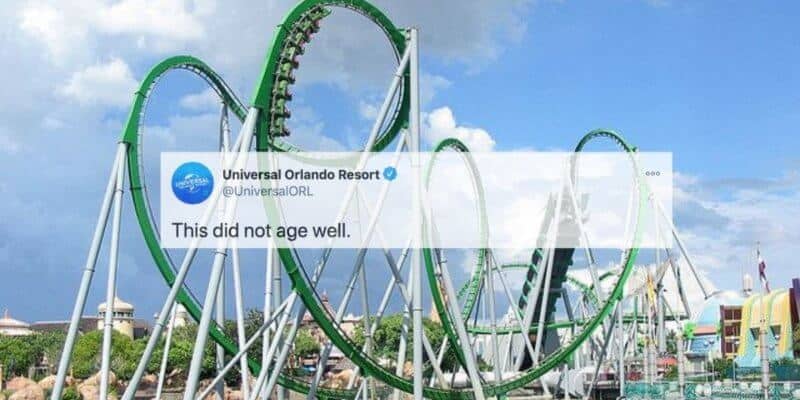 2020 has definitely been a rollercoaster of a year for all of us, especially to all of those in the theme park industry. Universal Orlando has been struck pretty hard when it comes to the coronavirus pandemic, having to have shut down, reduce capacity and operations, resulting in the company having to hemorrhage money. But, Universal being who they are, always has a good sense of humor no matter what.

Universal Orlando Resort (@UniversalORL) took to Twitter to reflect on their first tweet of 2020 which showcased a photo of The Incredible Hulk Coaster with the caption “2020, we’re in for a wild ride”. Well, little did Universal Orlando know how true that statement would soon become. Now, they retweeted the original tweet saying “This did not age well” and fans are loving it.

This did not age well. https://t.co/nAOhYtn5KN

Of course 2020 has been a tragedy for many, but for Universal, a company who has indeed suffered in 2020, to poke fun at the insanity that this year has been is really the best outlook to take. That being said, Universal definitely has accomplished lots during this year. They made sure Halloween was not forgotten even though Halloween Horror Nights was not running, by adding a few houses for guests to visit during the day when the parks were open, they were one of the first theme parks back after the closure, they have an epic attraction, VelociCoaster set to debut in summer 2021 which has seem remarkable progress, and from a guest standpoint, the parks seem to be slowly returning to normal with capacity feeling larger than before.

The tweet from yesterday has since gone viral, likely because of how spot on it truly is. Universal noticed the tweets popularity as well and replied:

Wow, this blew up. We don’t have SoundCloud, but we do have theme park tickets to check out: https://universalorlando.com/web/en/us/tickets-packages/vacation-packages/limited-time-offer

Wow, this blew up. We don’t have SoundCloud, but we do have theme park tickets to check out: https://t.co/McWiNpYQSq

Again, Universal is pulling from comedy to create fun content for their audience. Universal Orlando’s Twitter is so casual and funny, it makes the reader feel a friendship and easy bond with the account, and therefore the theme parks, which is why it works to push their ticket deals while they have eyeballs on it.

Do you like how Universal Orlando is making jokes and poking fun at everything going on?

Comments Off on Universal Orlando’s Tweet Did Not Age Well