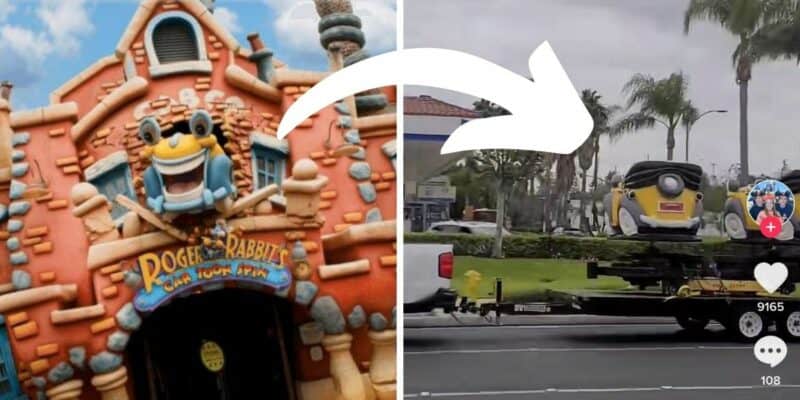 Jessica Rabbit became the new private eye in Mickey’s ToonTown to put a stop to those weasels in Roger Rabbit’s Car Toon Spin once and for all. The new Jessica Rabbit animatronic debuted in Disneyland in December 2021, prior to Disney announcing that ToonTown as a whole will also be receiving a complete renovation and update.

As Disney officially broke ground on the ToonTown revamp, Disney fans just spotted the ride vehicles for Roger Rabbit’s Car Toon Spin being towed down the highway and away from Disneyland.

At this time, the official Disneyland website still describes this ride as:

However, Toontown is now closed for a complete overhaul, which was announced last year. Mickey’s Toontown in Disneyland Park closed on March 9, 2022 to make way for a new, reimagined Mickey’s Toontown, which will debut in early 2023 alongside Mickey and Minnie’s Runaway Railway.

We know that the reimagining of Toontown will bring new experiences to families and young children, including new play experiences, as well as open, grassy play spaces for everyone to unplug. The entire theme of Mickey’s Toontown will include “a vibrant symphony of sights, sounds, and sensations,” according to Disney.

At this time, Disney has not announced if Roger Rabbit’s Car Toon Spin will reopen with the reimagining of ToonTown, but fans have just spotted the ride vehicles for the attraction being towed out of the Park and down the highway.

TikTok user @heyinsiders posted a video of Lenny, the ride vehicles, being towed down the highway with the caption:

Again, at this time Disney has not announced if Roger Rabbit’s Car Toon Spin will reopen with the reimagining of ToonTown or if it will be replaced, but Inside the Magic will update you as we get information.

Do you think Disney is doing away with Roger Rabbit’s Car Toon Spin? Let us know in the comments below.