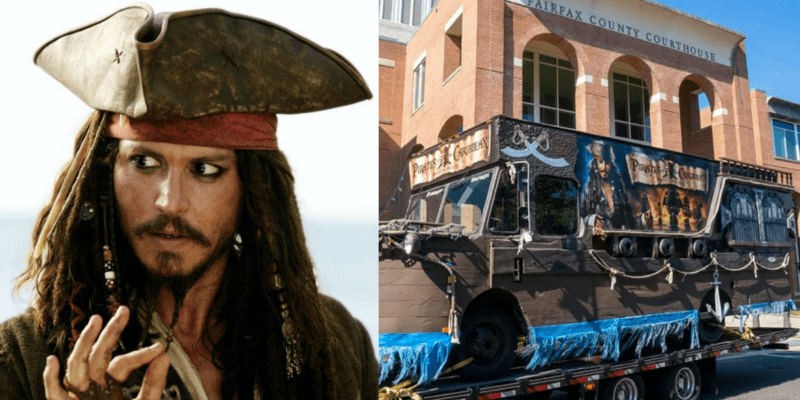 An extravagant show of support for Pirates of the Caribbean (2003) star Johnny Depp sailed past the Fairfax County Courthouse on Tuesday among the jury deliberations in Depp’s defamation trial against his ex-wife, Amber Heard.

Depp is suing Heard after she wrote an Op-Ed for The Washington Post in which she described herself as a victim of domestic abuse. Heard is countersuing Depp for $100 million, arguing that he and his former lawyer conspired to defame her by dismissing the allegations.

Both sides rested their cases last week ahead of Memorial Day Weekend, with jury deliberations beginning on Friday. The jury resumed deliberations on Tuesday, and one Depp fan supported the star in a unique way.

A pirate ship crafted out of a small truck sitting atop a flatbed sat in front of the Fairfax County Courthouse, supporting Pirates of the Caribbean-themed decorations and a mannequin Jack Sparrow. The ship was photographed by TMZ.

Pirates of the Caribbean fans have been vocal about their support for Johnny Depp during his ongoing defamation trial against Aquaman (2018) star Amber Heard.

Heard testified last week to receiving death threats during the trial. Through tears, she recounted being “harassed, humiliated, threatened every single day.” She testified that people “want to put [her] baby in the microwave.”

While Depp has been officially replaced as Jack Sparrow in the upcoming Pirates of the Caribbean sequel, he is rumored to star in Tim Burton’s Beetlejuice 2, slated for release in 2025.

Depp has also made surprise appearances in the United Kingdom as recently as last weekend, performing at a live concert with Jeff Beck at the Sheffield City Hall in England.

Jury deliberation in the ongoing defamation trial between Johnny Depp and Amber Heard will continue this week. Inside the Magic will report on any news about the upcoming verdict.

Have you been following the ongoing trial between Mr. Depp and Ms. Heard? What are your thoughts?