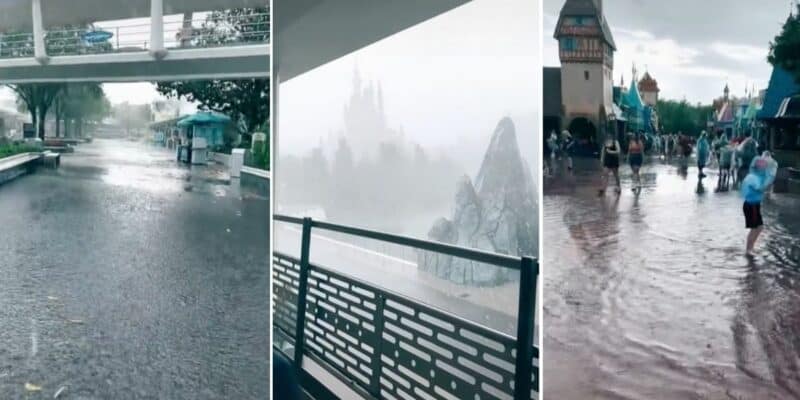 A recent video has shown intense rain slamming down at the Walt Disney World Resort’s Magic Kingdom Park, covering Cinderella Castle from view in an illusion fit for Sorcerer Mickey.

Orlando, Central Florida is known for its high temperatures and bustling theme parks like Walt Disney World and Universal Orlando Resort. And while Guests visiting Disney Parks or Universal Parks in Florida won’t encounter snow found in other locations like Disneyland Paris, rain, storms, and hurricanes frequent the state.

The Walt Disney World Resort is very busy currently, with sold-out Park Passes and Parks like Magic Kingdom Park and Disney’s Hollywood Studios at capacity, Guests are flooding to the Disney magic as The Walt Disney Company’s theme parks continue to welcome back visitors. The high crowd levels are also enhanced by Disney World’s 50th anniversary celebrations, AKA The World’s Most Magical Celebration, that began on October 1, 2021. The event saw the debut of the Disney Enchantment fireworks in Magic Kingdom and Harmonious at EPCOT’s World Showcase.

Demand for Disney World feels, for most, at an all-time high, and has also been reflected across the globe with Disney Parks recently posting a $7 billion in revenue. With the arrival of Disney Genie and Lightning Lane attractions, in addition to the limited Park Pass reservation system, Guests are encouraged to make the most out of their Disney vacation.

But, sometimes, things completely out of a Guest’s or Disney’s (no, Disney does not control the weather) take over the Parks. Enter the weather.

Rain and flooding are not unusual in Orlando, and over the past few months, Guests have captured others experiencing extreme weather in Magic Kingdom and Disney’s Hollywood Studios, with the areas reminiscent of Disney’s water parks. In a newly posted video, Guests were evacuated from the Tomorrowland Transit Authority PeopleMover after the rain was unleashed at the Disney Park.

Nothing beats a good ride evacuation!

The video shows the Guests riding the PeopleMover, gliding past the construction of the new TRON rollercoaster — which began testing recently — and then being swallowed by intense downfall. From the footage, Cinderella Castle vanished behind sheets of grey rain as Tomorrowland and the surrounding Main Street, U.S.A. areas flooded. The Guests riding the Tomorrowland Transit Authority PeopleMover were eventually evacuated from the popular attraction, presumably for health and safety reasons.

Rain can often shut down many outdoor attractions, and will also often lead to the cancellation of nighttime spectaculars like the new Disney Enchantment at Cinderella Castle. However, if Guests are looking to get wet on their Disney trip, both Disney’s Typhoon Lagoon Water Park and Disney’s Blizzard Beach Water Park offer family fun, slides, and other experiences. Note that the latter is currently closed for refurbishment.

As for evacuations, they are not uncommon at Disney Parks with any attraction possibly breaking down during Park hours — Spaceship Earth at EPCOT recently had multiple reported issues, as has Star Wars: Rise of the Resistance, while rides like Space Mountain have been experienced with the lights on at Parks like Disneyland Resort. Oftentimes Disney will offer hindered Guests a free Lightning Lane pass to return once the ride is up and running.

Have you ever been hindered by the weather while at Walt Disney World? Let us know in the comments down below!