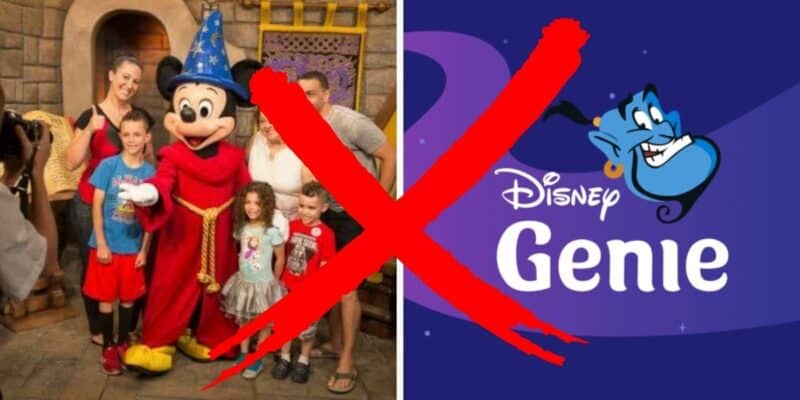 Yesterday, we reported that Disney World eliminated Disney Genie+ and Lightning Lane from one popular offering at Disney’s Hollywood Studios, meaning now it now only utilizes StandBy only.

Ever since the announcement, fans are speaking out regarding this decision.

Last year, both FastPass+ at Walt Disney World and MaxPass at Disneyland were officially retired, and instead, Lightning Lane took its place — a paid service. Lightning Lane is part of the new Disney Genie and Disney Genie+ service offered.

The Disney Genie+ Lightning Lane Entrance is described as:

When you take your day to the next level by purchasing Disney Genie+ service, you may choose the next available arrival window for Lightning Lane entrances at select attractions and entertainment. More than 40 experiences in the four theme parks are included in the service.

You can enjoy a Disney Genie+ Lightning Lane entrance once per day. If you’d like to re-ride an attraction or see a certain show again within the same day, you are welcome to use our regular standby line.

Whereas the Individual Lightning Lane Entrance is as follows:

When Disney World reintroduced meet and greets after the ongoing pandemic temporarily suspended them, Meet Disney Stars at Red Carpet Dreams offered Lightning Lane and Genie+ to Guests. Now, however, just weeks after this popular offering was brought back, Disney is doing away with Lightning Lane and Genie+, and instead, is moving to StandBy only.

At Meet Disney Stars at Red Carpet Dreams at Disney’s Hollywood Studios, Guests have the opportunity to meet with Mickey and Minnie mouse as they are dressed in their best. Minnie Mouse is wearing one of her beautiful red-carpet gowns while Mickey is wearing his iconic Sorcerer outfit.

Yesterday, Disney World has made the decision to eliminate Lightning Lane and Genie+ offerings from Meet Disney Stars at Red Carpet Dreams at Disney’s Hollywood Studios and fans are speaking out.

Fans Speak Out Regarding Removal of Lightning Lane and Genie+

Inside the Magic reader, Linda S., wants Disney to bring back FastPass:

I think they should go back to fast pass, the Genie is just another way to take money off people, we’ve been going to Disney for over 40 years and with the cost of everything now I don’t think we will be able to afford it next year, prices are extortionate.

While another Inside the Magic fan, Reggie, said they want Disney to only offer StandBy:

Need to bring back just stand by. Went last year and it was only one line stand by and it was great it moved steadily. No confusion.

Inside the Magic reader, Holly, commented on our article, writing:

I wish the genie and lightning passes would end all together, it is too costly for our family of 7, on top of tickets, hotels, parking, food. This makes the wealthier get more rides done while the poor don’t have the same privileges because it isn’t in the budget.

And Christine M. voiced their frustrations with Genie+ and Lightning Lane:

We purchased 6 Genie + passes when we went in February. They didn’t work on any line. One attraction still required a reservation which we were not told about when we made the purchase. We couldn’t get a refund, we were given Disney gift cards I stead. Great way to make more money and anger visitors

For someone who’s been throughout the years, I miss the old fast pass ways. There was a max on how many could be sold. I went the week before parks went back to full capacity and it was insane. To reserve a time slot is a complete joke! We had 4 days, the app opens at 7am and every morning we tried to get Slinky Dog and Rose of the Resistance and we’re unsuccessful. We finally got Slinky Dog on day 4, but unfortunately my mom had to head back a day early and didn’t get to ride it. The stand by lines were 180-300 min! That’s insane to pay all this money to maybe ride 2 rides that day. Now to charge extras per ride is baffling, loosing more respect for Disney Corp.

And Inside the Magic reader who goes by RTeker hopes Disney eliminates Lightning Lane all together:

Look on the bright side, that’s ONE lightning lane down. Now if they can do this with EVERYTHING else, right..

At Meet Disney Stars at Red Carpet Dreams, Guests have the opportunity to meet with Mickey and Minnie mouse as they are dressed in their best. Minnie Mouse is wearing one of her beautiful red-carpet gowns while Mickey is wearing his iconic Sorcerer outfit.

Disney describes this offering as:

And the Mouscar Goes to…

See leading lady Minnie modeling one of her dazzling red-carpet gowns. Meanwhile, Mickey holds you spellbound as the Sorcerer’s Apprentice from his hit picture Fantasia.

Everyone’s a big cheese at this tribute to the brightest stars on the silver screen.

Minnie Mouse is every bit a lady! She’s devoted to her sweetheart Mickey and always makes her friends feel special.

Mickey just wants to make us smile. He is a talented star, gracious host and loyal friend.

Are you happy to see Disney eliminate Lightning Lane and Genie+ from Meet Disney Stars at Red Carpet Dreams at Disney’s Hollywood Studios? Let us know in the comments below.