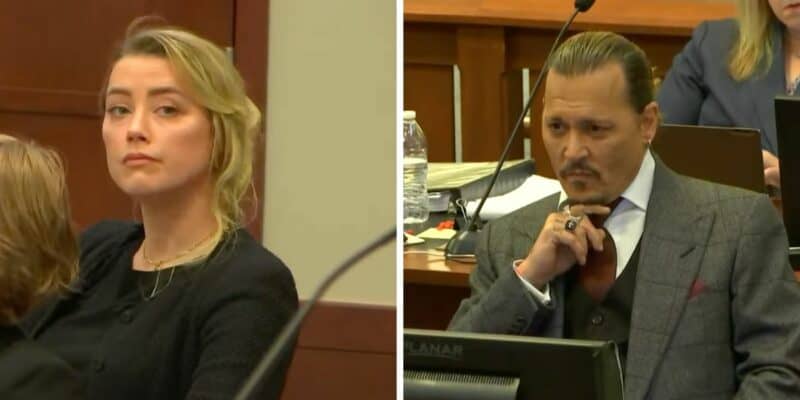 Johnny Depp, 58 (Pirates of the Caribbean) is suing his ex-wife, Amber Heard (Aquaman), 35, for $50 million after she wrote an Op-Ed in The Washington Post in which Heard described herself as a victim of domestic abuse. While Heard didn’t mention Depp directly in her Op-Ed, he argues the article defamed him and negatively impacted his career.

Today, the judge in the six-week-long trial made her final decision on Depp’s motion to dismiss Heard’s countersuit. Depp’s attorney, Ben Chew, argued that Mr. Depp could not be held responsible for statements made by his former lawyer, Adam Waldman, about Ms. Heard.

“There’s no evidence that Mr. Depp even saw the statements by Mr. Waldman until he was sued,” he said.

“There’s no basis to grant a motion to strike on this agency argument, on this actual malice argument. The evidence shows that not only was Mr. Waldman Mr. Depp’s agent, but that the two of them conspired to falsely accuse Amber of creating a hoax and falsify evidence that they believe supported their theory and what they wanted to achieve.”

Fairfax County Circuit Judge Penney Azcarate struck down the motion to dismiss Heard’s countersuit. “The jury may infer Mr. Waldman made these specific statements to a third party to service plaintiff by portraying defendant as an opposing litigant in a negative light,” Azcarate said.

“Consequently, there is more than a scintilla of evidence that a reasonable juror may infer Mr. Waldman made the counterclaim statements while realizing they were false or with a reckless disregard for their truth,” she continued.

“It is not my role to measure the veracity and weight of the evidence,” Azcarate said. “The plaintiff’s motion to strike is denied, OK?”

This decision came after Heard’s team rested their case on Tuesday without calling Johnny Depp to the stand, which was expected. Depp has not yet rested and he may still take the stand this week as part of his own team’s rebuttal, but it is not confirmed yet. Other high-profile witnesses, including Depp’s ex-girlfriend Kate Moss, are confirmed to take the stand today and tomorrow.

Depp lost a defamation suit in the United Kingdom last year when he sued The Sun for referring to him as a “wife-beater.” The High Court found substantial evidence to support The Sun‘s claims and has denied Depp’s appeals.

Have you been keeping up with the Johnny Depp and Amber Heard trial? What do you think of today’s news?