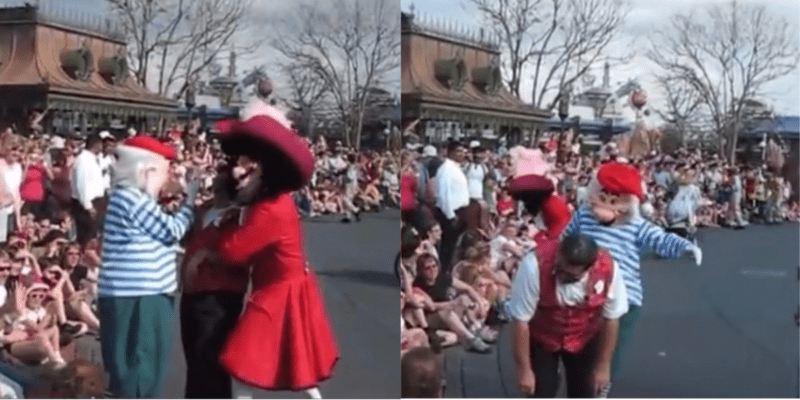 Cast Members are also behind one of the most magical experiences offered at Disney Parks, character interactions. Though these interactions have not been quite the same since both Disneyland Resort and Walt Disney World reopened in April 2021 and July 2020, they continue to create discussion.

While most character interactions are joyful and create beautiful memories for Guests, they can sometimes take an unexpected turn.

Such is the case of a video recently posted by Disney Stuff! (@_disney._stuff_), in which Guests can see Captain Hook and Mr. Smee attacking a Cast Member during what appears to be a parade, as hundreds of Guests can be seen sitting and standing while music plays in the background. With not much information on the background of the video, it can’t be assured which Disney Park the footage is from.

We have also previously reported on a video where Eeyore can be seen slapping Captain Hook across the face. And if it is true that these interactions were all in good fun, there have been incidents involving Cast Members accidentally injuring Guests. This moment was clearly all out of fun, and very performative and in character.

Disney recently announced through their social media, and later through a post on the Disney Parks Blog official website, that character meet and greets would return to normal on April 18, so Guests will soon be able to hug their favorite characters again very soon!

Disney Parks Blog adds the return of traditional character meetings comes as part of the returning entertainment experiences that have been gradually brought back to the parks:

This exciting milestone continues the recent, powerful momentum of returning entertainment across the Disney parks and resorts. As part of the 50th Anniversary celebration at Walt Disney World, we’ve welcomed back shows such as “Mickey’s Magical Friendship Faire” and “Indiana Jones Epic Stunt Spectacular,” along with the Disney “Festival of Fantasy” Parade and new experiences like “Disney Adventure Friends Cavalcade.” This spring, Disneyland will see the return of several beloved nighttime spectaculars, including “World of Color,” “Disneyland Forever,” “Fantasmic!” and “Main Street Electrical Parade,” celebrating its own 50th anniversary. And aboard Disney Cruise Line, we’re once again delighting guests with fireworks at sea and magnificent, Broadway-style shows on every ship.

With character greetings coming back, who’s at the top of your “must meet” list for your next Disney vacation? Let us know in the comments below!