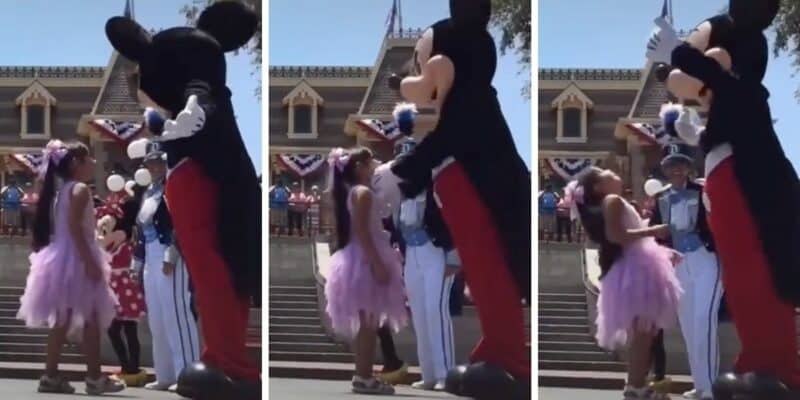 Walt Disney World is filled with unique experiences, including family-thrilling rides, one-of-a-kind shows, and of course, meeting some of our favorite characters such as Mickey Mouse and friends, the Disney Princesses, and even the Disney Villains!

A majority of the time, interacting with the Disney characters makes for a loveable and memorable experience. However, it is safe to say that sometimes things won’t go as planned.. and that is unfortunately what happened when one little girl approached Mickey Mouse for a hug.

A little girl was once visiting the Disney Parks when she spotted Mickey and Minnie in front of the train station at Disneyland. In the video posted to TikTok, you can see Mickey and Minnie performing some type of show as they look to be conducting the music being played. This is when the little girl approached Mickey, who accidentally smacked her in the face as he was moving his hands and arms.

Immediately after, you can tell that Mickey felt bad as he took the little girl in for a hug and squeezed her tight.

Although at this time, Guests cannot get in close contact with the Disney characters at Walt Disney World or Disneyland, Disney recently confirmed socially distanced meet and greets will be a thing of the past as the world continues to move forward amidst the ongoing pandemic.

Related: Mickey Once Repeatedly Hit a Guest’s Back – For Good Reason!

Are you excited to see character meet and greets returning to normal? Let us know in the comments below.