Mickey Once Repeatedly Hit a Guest’s Back - For Good Reason! - Inside the Magic 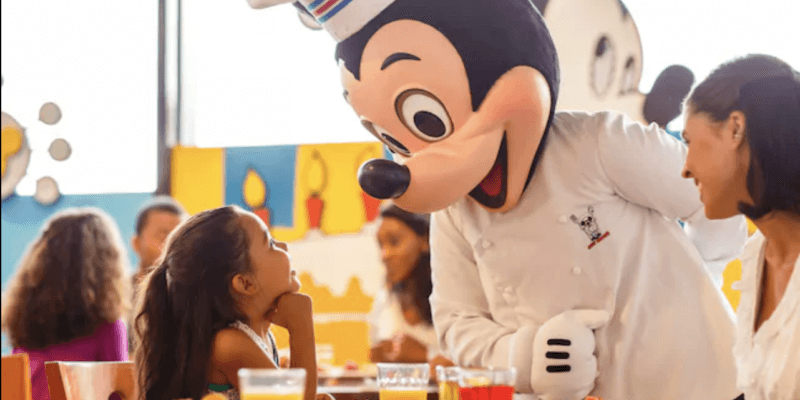 Walt Disney World is filled with unique experiences, including family-thrilling rides, one-of-a-kind shows, and of course, meeting some of our favorite characters such as Mickey, Minnie, the Disney Princesses, and even the Disney Villains!

A majority of the time, interacting with the Disney characters makes for a loveable and memorable experience. However, it is safe to say that sometimes things won’t go as planned and will leave you with, well let’s just say an odd encounter. And that is exactly what happened to one Guest when dining at Chef Mickey’s at Disney’s Contemporary Resort.

On a Reddit thread asking Disney fans to tell their favorite (and weirdest) character encounters at the Disney Parks, one user commented with a pretty hilarious story.

The user, who goes by Ellipsesc, explained that one time in 1994 while dining at Chef Mickey’s, Mickey Mouse came up and starting hitting the Guest’s back — but for good reason. They write:

I had a waterbug on my back at Chef Mickey’s once and didn’t know it. Mickey came along and just started hitting my back without any precursor, I thought I was being attacked, I haven’t been back to Chef Mickey’s since 1994

The story had other users chuckling, including ThePolemicist who commented back, “This is hysterical” and essonescoopberries, who expressed, “I’m sorry but I can’t stop laughing about this!”

Of course, Mickey was just trying to help the Guest out as he spotted a water bug on their back, however, as the Guest who had no clue what was happening, we can completely understand why they were left with this memory.

Chef Mickey’s recently reopened to Guests after being temporarily closed due to the ongoing pandemic. Things are a little different at the restaurant than they were prior to the temporary closure. Chef Mickey’s is currently described by Disney World as:

Experience Character Dining and an enhanced all-you-care-to-eat, family-style meal in a bright, happy space. As the monorail whizzes by, soak up the expansive views of Bay Lake and behold the stunning 90-foot-high mural by Disney Legend Mary Blair that overlooks the festive eatery. Each table will receive a special, autographed card keepsake from Mickey and his friends.

Throughout the dining experience, Mickey Mouse and some favorite pals will make surprise appearances in each of the dining rooms. See them move throughout the restaurant, waving hello as rollicking music fills the air.

Delight in a Bountiful Breakfast and Savor Delectable Dinner Fare

Dinner offerings begin with a first course including Chef Mickey’s Caesar Salad and Citrus-Poached Shrimp Salad, followed by a second course with signature items such as the Potato Gnocchi, Roasted Garlic Potato Gratin and Plant-Based Faro Wheat Fried Rice, as well as protein selections featuring Prime Rib, Traditional Roast Breast of Turkey and Salmon. And please save room to end your feast with the Pastry Chef’s sensational, family-style desserts!

Related: Disneyland Guests Once Arrested For Pushing Pluto into a Fountain

Have you ever had an odd experience with a Disney character? We want to hear! Let us know in the comments below.