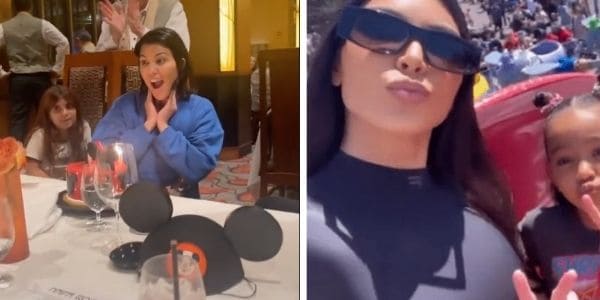 After her sisters caused some commotion at Disneyland the other day, Kourtney Kardashian returned to celebrate an important day.

From Marvel’s Chris Evans (Captain America) to rap stars Travis Scott and Kanye West, and many others, it seems as though celebrities are constantly taking trips to the Disney Parks.

As seen in a video posted to TikTok, Kourtney Kardashian can be seen spending her birthday at the Disneyland Resort. She was accompanied by her partner Travis Barker as well as her children. See the video below courtesy of @kardashhome:

This would be an innocent little celebration if you could look past the recent drama her sisters and family members have been causing at the Disneyland Resort lately. We saw Kylie Jenner’s bodyguard go off on a Guest after the Guest filmed her walking through the Park.

Kourtney’s sisters Kim and Khloe also caused some commotion at the Disneyland Resort after cutting through the huge crowds and riding an attraction all by themselves. This understandably made lots of Guests angry, as they had been waiting their turn for the ride. Some keen Guests even claimed that the Kardashians used Disney’s disability pass in order to bypass the lines. These claims were baseless except for the fact that there was a blue tag spotted on one of the Kardashian’s strollers. It is important to remember that we do not know the medical conditions of the Kardashian family or their children.

Have you ever spotted a celebrity at the Disney Parks?