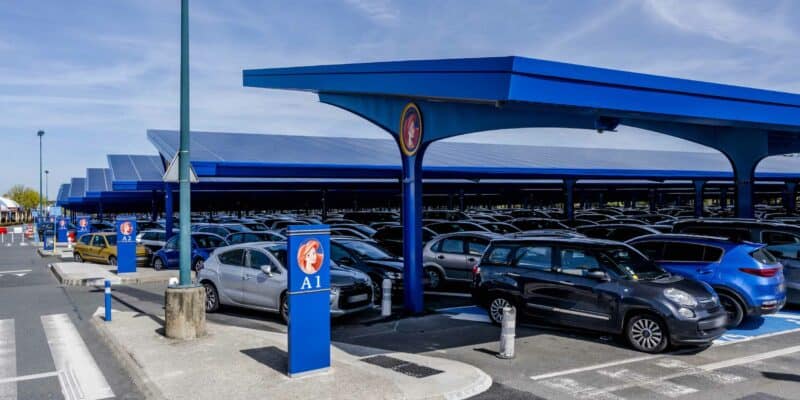 As Disneyland Paris celebrates its 30th anniversary, the Resort has undergone significant changes aesthetically and as part of a transformation journey. The Park continues to implement large-scale projects focusing on renewable energy, as the first section of its solar canopy plant begins operation, generating 10 GWh to supply the Park per year, which is the equivalent to the annual energy consumption of a city of 4800 inhabitants.

The solar canopy plant is being developed through a co-investment with French company Urbasolar and started being built in the fall of 2020. It is projected to supply the Resort with 36 GWh/year by 2023, equivalent to the annual energy consumption of a city with 17,400 inhabitants, contributing to the reduction of Val d’Europe local territory greenhouse gas (GHG) emissions by approximately 890 tons of CO2 per year.

The plant currently has over 46000 photovoltaic panels installed in the main Guest parking lot and is projected to be one of the largest in Europe upon completion. The solar canopies generate renewable energy at the same time as they provide additional Guest enhancements, including shade and shelter from direct sunlight, rain, or snow.

Damien Audric, Director of Development and Environment, declared the following regarding this project:

With the first section of the solar canopy plant that has come online, we have reached an important milestone and another step forward in the implementation of this project, which is at the heart of Disneyland Paris’ environmental strategy, aiming for a significant reduction in greenhouse gas (GHG) emissions and a full decarbonisation of its energy supply

This development is an excellent example of Disney Project Possible, the company’s global commitment to taking action to change our planet’s story through reducing our environmental footprint, caring for wildlife and their habitats, and creating stories that inspire action.

As detailed by Disneyland Paris News, the solar canopy plant is part of the constant efforts put in place by the company in six environmental focus areas: reducing GHG emissions; moving toward sustainable waste management – for example, by reducing the use of plastics; preserving water resources, including through the establishment of a wastewater treatment plant; developing a responsible supply chain; preserving and fostering biodiversity and supporting global actions to protect the environment for future generations.

Disneyland Paris seems to be the pioneer of renewable and sustainable practices among Disney Parks around the world, as this action follows the recent use of drones and holi powder for several entertainment offerings instead of tons of fireworks each year, an innovative decision for sure, as well as an environmentally conscious one.

Related: Disney Announces Nearly Half Of Disney World Will Be Powered By Solar Energy

We have recently seen Disney’s Sequoia Lodge reopen while the Disneyland Paris Resort continues to undergo a refurbishment. On top of that, we have seen price increases for pins and, recently, even a stunning snowfall! The Disneyland Paris app has also changed; read more on that here. Disney Stars on Parade is also back at Disneyland Park now that the holidays are over! Guests looking to skip the line can also purchase Premier Access, a pay-per-ride system that allows Guests to skip the standby line.

What do you think of Disney’s efforts to shift into more sustainable practices? Let us know in the comments below!

Comments Off on Disneyland Paris Continues Its Shift Towards Renewable Energy