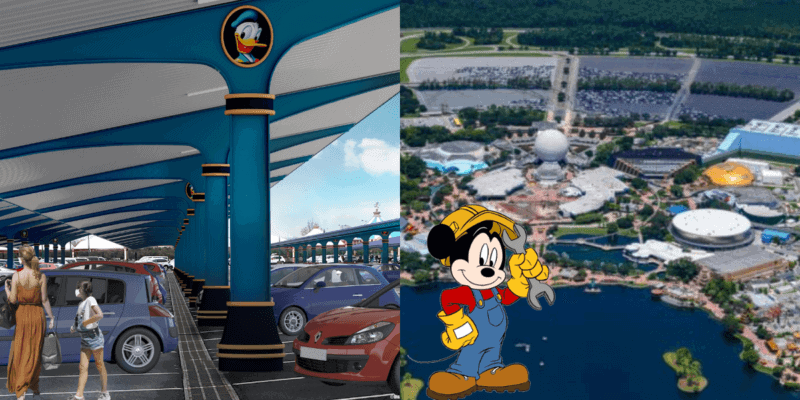 On the morning of October 22, Disneyland Paris unveiled plans for what is to be one of the largest solar canopy plants in Europe, and one aspect of this plan is very much needed at the Walt Disney World Resort in Orlando, Florida.

Sharing the news on its official Twitter accounts, Disneyland Paris displays concept art of what is to come. What immediately caught this writer’s attention was the now soon-to-be-covered parking lot.

One of the largest solar canopy plants in Europe is coming to Disneyland Paris by 2023! ☀ 67,500 solar panels will cover the guest parking, marking a new milestone in Disneyland Paris’ environmental commitment. ? More details: https://t.co/RwjC6QHb4t pic.twitter.com/9FcXFEzu4M

This is one of those genius moments that once revealed to the public appears like it should have been common sense. A “How could we have not done this sooner?” kind of emotion. Especially for someone whose home parks are at Disney World.

In a video about the project, which is shared below, the Franco-Disney resort explains that 67,000 solar canopies will cover 9,600 parking spaces. The parking space covering alone is expected to generate 31 gigawatts (GWh) a year. That’s 17% of the electricity used by Disneyland Paris. All while advancing the Guest experience by now shielding their vehicles from the sun’s heat.

To be fair, the Walt Disney World Resort has already made great strides in alternative energy since the creation of EPCOT. It already has a massive 270-acre solar farm, which forms an aerial hidden mickey, and solar panels are being installed on the exterior of the new Guardians of the Galaxy-themed roller coaster, Cosmic Rewind.

But this canopy idea really seems like a no-brainer. Florida is HOT. It is called “The Sunshine State” for crying out loud. Our cars bake in the midday sun’s rays. Rays that can clearly be collected and used as energy instead. Also, the Walt Disney World Resort has four major theme parks, each with its own immense parking lot on which the canopies could be built.

Let’s use EPCOT as an example. According to D23, there are 11,391 paved parking spots in the 141-acre lot. Using Disneyland’s numbers–which suggests a single parking space can generate .0032 GWh annually–EPCOT’s parking lot could generate 36.4 GWh a year if all its spaces were covered by solar canopies.

The Magic Kingdom Parking lot at the Transportation and Ticket Center, and the parking lots at Disney’s Animal Kingdom and Disney’s Hollywood Studios also have similar-sized parking lots suggesting a slightly less but similar output of solar energy. Use of the parking lots would also allow Disney to save land space for more entertainment or conservation purposes.

Kissimmee, FL is also closer to the equator than Coupvray which means that the days are longer throughout the year. More exposure to sunlight means more opportunities to collect solar energy.

But in this writer’s opinion, the enhanced Guest experience alone makes this project worthwhile. Florida is at most times unbearably hot. Covered parking–even if it began only for “preferred parking”–would be a real dream come true in “The Place Where Dreams Come True.” Having that coverage also generate clean energy and reduce carbon emissions would just make the situation that much better!

What do you think? Should Disney World invest in solar-paneled parking canopies? Why or why not? Let us know in the comments!