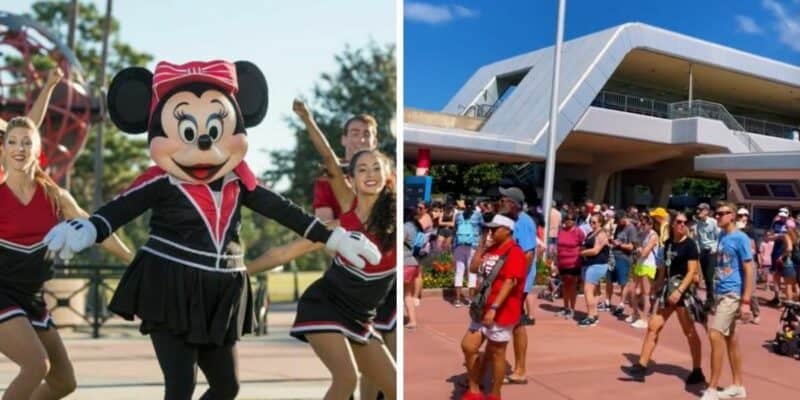 Walt Disney World hosts several cheer competitions at the ESPN Wide World of Sports Complex throughout the year. And as cheer season is upon us, so are the crowds that come with it.

Disney World Guest and TikToker, magicbandsandtrashcans, visited EPCOT yesterday where the lines to get into the Park were extended past the Monorail entrance. This could be due to a raised capacity, but also due to the fact that it is now cheer season.

They captioned the video:

Cheer season is upon us! Hug a cast member today…they’re gunna need it.

Cheer season is upon us! Hug a cast member today…they’re gunna need it.

Additionally, if you want to visit a theme park, you need both a valid theme park ticket as well as a Park Pass reservation. In 2020, Chairman of Parks, Experiences and Products Josh D’Amaro indicated that the newly implemented Park Pass system is a “new normal” that isn’t going away anytime soon, if ever, so Guests should get accustomed to utilizing the Disney Park Pass system if they are planning a trip to Walt Disney World.

As we approach the upcoming summer months, followed by the holiday season, we expect to see the Park Pass availability continue to sell out so if you are planning on visiting Walt Disney World and its four theme parks — Magic Kingdom, EPCOT, Disney’s Hollywood Studios, and Disney’s Animal Kingdom — be sure to secure your Park Passes as soon as possible.

Are you visiting Disney World? Have you noticed an increase in crowd levels? Let us know in the comments below.