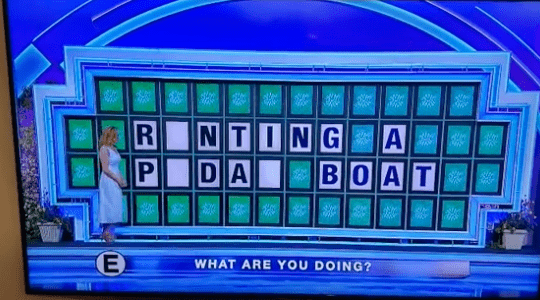 Earlier this month, a Wheel of Fortune puzzle completely stumped contestants and went viral as it is frustrated fans. Now, this is happening once again.

Related: Mayim Bialik Made a Change to ‘Jeopardy!’ And Fans Are Mad

Now, another puzzle is going viral for stumping contestants and, once again, frustrating fans.

The puzzle mishap was shared in a video to TikTok. The category was “What are you doing” and the video begins with the puzzle already reading “R_n_ing a p_da_ b_a_.”

The first contestant heard in the video then calls for an “o”, which resulted in the puzzle reading “R_n_ing a p_da_ boa_.” She then asked to solve the puzzle and guessed “Renting a paddle boat”, which clearly does not fit.

The second contestant guessed a “t”, which resulted in the puzzle reading “R_nting a p_da_ boat.” He then proceeded to buy an “e”, so the puzzle was filled in to read “Renting a peda_ boat.” He then asks to solve the puzzle, guessing the same exact thing as the first contestant, “Renting a paddle boat”, despite having more letters filled in and despite that answer already being guessed.

The third contestant, instead of solving the puzzle, opted to spin the wheel. Then, instead of guessing an “l”, which would make the most sense, the contestant guessed an “m”, meaning she thought the puzzle read “Renting a pedam boat.”

Now, back to the first contestant who guessed “Renting a paddle boat”, she spins the wheel and guesses a “w”, meaning she thought the puzzle read “Renting a pedaw boat.”

Did you see this episode of Wheel of Fortune? What did you think of this puzzle? Let us know in the comments below.