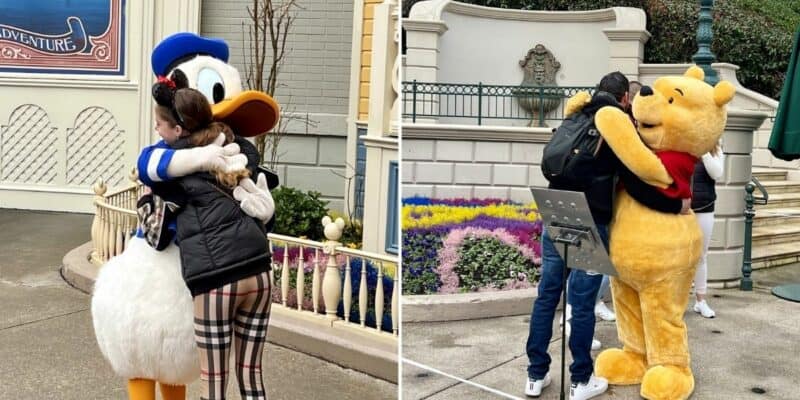 Two years since the global pandemic shut down theme park operations worldwide, Disney Parks have slowly been removing the restrictions put in place to combat the spread of COVID-19.

Now, just days after changing face-covering rules, one Disney Park has seemingly welcomed back close interactions with characters. Hugs are back!

As of now, all but one Disney Park is currently open (Hong Kong Disneyland remains closed until April) with each operating differently in regards to health and safety regulations. For Disneyland Paris, though, Disney has taken a huge step forward when it comes to their character interactions.

Earlier this week, Disneyland Paris removed their mask mandate for all Guests aged six and above, meaning that Guests entering Disneyland Park, Walt Disney Studios Park, Disney Village, or their myriad of Disney Hotels, can go maskless for the first time in years. This, of course, is only for those with a valid “Vaccine Pass” (for Guests 16+) or “Health Pass” (for Guests 12-15), which are essential requirements for those wanting to purchase a ticket for Disneyland Paris. Official guidance can be found here.

Now, just days after, and only days before the Park’s 30th anniversary celebration, Disneyland Paris has seemingly welcomed back close character interactions. For many Disney Parks, character meet and greets have either been suspended or altered considerably — as seen in Walt Disney World Resort where meet and greets were officially rebranded as “Sightings”, last year.

📍Character hugs and closer contact are once again allowed at Disneyland Paris: pic.twitter.com/6I2nBpdTYv

Another image shows another Guest hugging one of the Fab Five:

Hugs with Donald are back!

📍 Hugs with Donald are back! 🥰 pic.twitter.com/mhCJKQgeF6

These interactions with characters mark a momentous occasion for Disney Parks, and are surely a sign that more meet and greets could return to semi-normal operations sometime soon in various other theme park locations throughout the world.

It is worth noting that the official Disneyland Paris website has not made a clear announcement about whether all characters are allowing hugs and photos, or if it is just certain situations that allow for these closer interactions. At the time of publication, the website states:

If you are visiting Disneyland Paris, it would be wise to check with a Cast Member what is and is not allowed. As we have seen from situations in Disneyland Resort, Guests including children, are still unable to interact closely with characters.

During the celebration, Guests will still be able to ride popular attractions like Star Wars: Hyperspace Mountain, Star Tours: The Adventures Continue, Phantom Manor, and Big Thunder Mountain — which they can also experience using Disney Premier Access. Also slated for opening during the 30th is the second Avengers Campus at Walt Disney Studios Park.

Do you think more Disney Parks should follow suit and bring back close character interactions? Let us know in the comments down below!