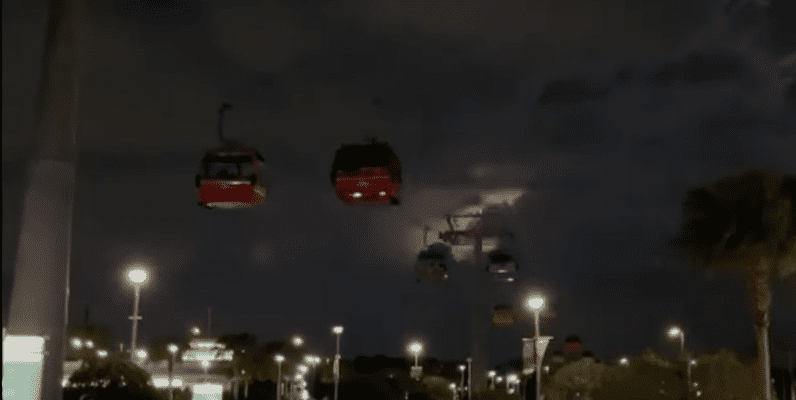 Credit: Screenshot via Streaming the Magic

Disney’s newest transportation system –the Disney Skyliner — takes Guests from their Resort hotel to one of the Disney theme parks, all while taking in beautiful views of Walt Disney World landscape.

Depending on the weather, some of those views can include strikes of lightning, making for a very different Skyliner experience.

Walt Disney World weather may consist of lots of sun, but also several thunderstorms and random pop-up showers. If you have an upcoming vacation, be prepared to not only bring sunscreen and sunglasses, but ponchos and extra clothes as the rainstorms in Orlando during the summer months can come on suddenly.

Thunderstorms are pretty common in Florida, and on a recent trip to Disney’s Hollywood Studios, as Guests were leaving the Park, that is exactly what some encountered.

You can see the video of the lightning below, along with the Skyliner still running:

We do want to note that Disney consistently monitors the weather, and if the lightning was in close enough proximity to the Disney Skyliner, Cast Members would have shut down the transportation system to ensure the safety of Guests.

Have you ever ridden the Disney Skyliner in a thunder or lightning storm? Let us know in the comments below.