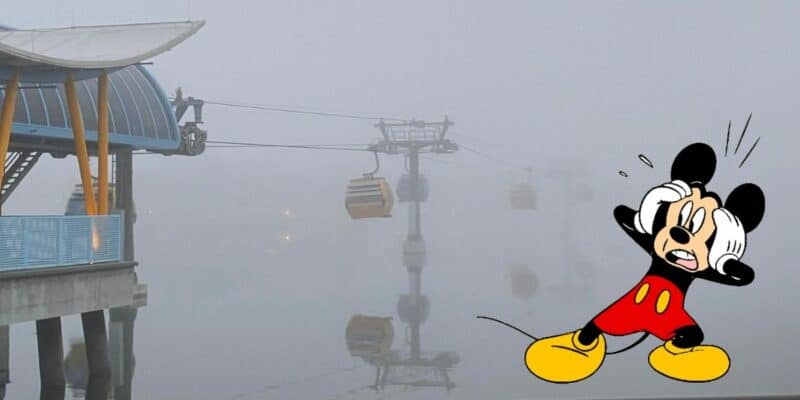 Disney’s newest transportation system –the Disney Skyliner — takes Guests from their Resort hotel to one of the Disney theme parks, all while taking in beautiful views of Walt Disney World landscape.

Though on a recent trip to Walt Disney World, the weather caused some fog to form, forcing Guests to ride the Disney Skyliner into an “abyss.”

Recently, Central Florida, which is where Walt Disney World is located, experienced some bad weather — including high winds, rain, and fog. The fog hovered over various areas of water, which was caused due to the humidity in the air. One of the places Guests noticed a high fog level was at Hour Glass Lake, located between Disney’s Art of Animation Resort and Disney’s Pop Century Resort.

One Disney World Guest captured the fog over Hour Glass Lake, which is also where the Disney Skyliner station is, writing “Skyliner to Nowhere!”

Skyliner to Nowhere! from WaltDisneyWorld

Seeing this photo reminds us of a “haunted” version of the Disney transportation system. It brings us back to Halloween, thinking of the “spookiness” of October. We thinking riding the Skyliner into an “abyss” of fog would be fun and love seeing this captured perfectly in an image.

Have you ever ridden the Disney Skyliner? Is this your favorite mode of transportation? Let us know in the comments below.