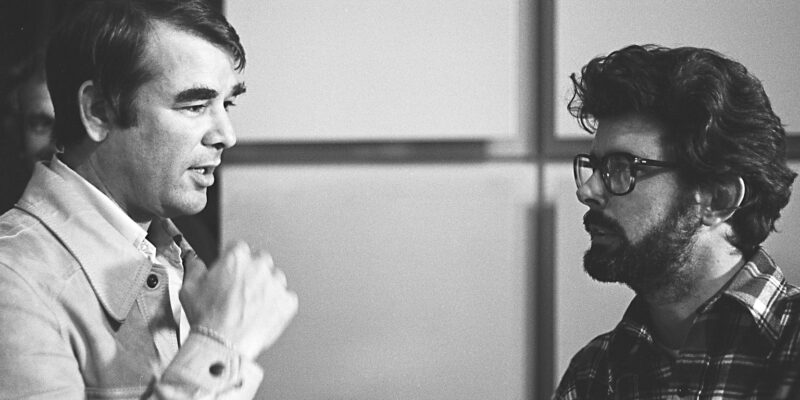 Longtime studio exec and producer, Alan Ladd Jr. has been involved in many films and even won an Oscar for Braveheart (1995). When 20th Century Fox Studios tried to shut down Star Wars it was Ladd who saved the franchise. Sadly, the legendary producer has died at age 84 as his daughter Amanda Ladd-Jones said on social media:

“With the heaviest of hearts, we announce that on March 2, 2022, Alan Ladd, Jr. died peacefully at home surrounded by his family.Words cannot express how deeply he will be missed. His impact on films and filmmaking will live on in his absence.”

While Ladd was head of the production at Fox, Pathe Entertainment, and MGM, he decided he wanted to create his own production company, Ladd Co. which was very successful. He had been involved with 14 best picture nominees. Some of the memorable movies Ladd has been involved in are, Young Frankenstein (1974), The Rocky Horror Picture Show (1975), The Omen (1976), Breaking Away (1979), Body Heat (1981), Chariots of Fire (1981), Blade Runner (1982) and Moonstruck (1987).

Ladd was also a great supporter of female representation as he helped with making Ridley Scott’s Alien (1979), which stars Sigourney Weaver as the main protagonist. Ladd also greenlit Thelma & Louise (1991) which was considered to be an icon of feminist cinema with Susan Sarandon and Geena Davis starring in the film.

In 2011, Ladd also managed to settle a long-running suit with Warner Bros. as the producer claimed that they had underpaid his company millions of dollars for films such as Blade Runner, Chariots of Fire, and the Police Academy movies.

Related: Lucasfilm Wraps Production on Most Important Project Since ‘A New Hope’

Ladd first began his career as a stuntman for the movies, Santiago (1956) and The Deep Six (1958) which were directed by his father, Alan Ladd (This Gun for Hire, Shane).

In the early 1960s, Ladd became a talent agent for Creative Management Associates and repped the likes of Judy Garland, Robert Redford, and Warren Beatty. Six years later, Ladd ventured over to London to work on some films and then returned to Los Angeles in 1973 to become head of creative affairs for Fox, and in a short period of time, he became the studio present.

When George Lucas proposed Star Wars: Episode 4 — A New Hope  (1977) to Fox, everyone objected, except for Ladd. He went through with the project because he believed in the potential despite everyone else believing it was a waste of time. Lucas shared his thoughts about that moment when Ladd stood up for Star Wars:

“The only meeting I had with Laddie about the script, … he said, ‘Look, it doesn’t make any sense to me whatsoever, but I trust you. Go ahead and make it.’ That was just honest, I mean, it was a crazy movie. Now you can see it, know what it is, but before you could see it, there wasn’t anything like it. You couldn’t explain it. You know, … it was like this furry dog driving a spaceship. I mean, what is that?”

From here the producer did work with other studios before reestablishing his company to make Braveheart with Mel Gibson. This was considered to be Ladd’s payback as the producer told the Los Angeles Times after the 1996 Oscars:

“If I were more eloquent, I would have thanked Credit Lyonnais for treating me shabbily and allowing me to take this project with me. In fairness, MGM couldn’t have afforded to make this film at the time. Paramount could.”

This was due to the fact that there were some issues with MGM and Ladd which led the producer to partner with Paramount to Braveheart which would receive five Oscars. His company went on to make more beloved films such as The Brady Bunch Movie (1995), A Very Brady Sequel (1996), and The Phantom (1996) and he worked with Paramount to produce An Unfinished Life (2005) and Gone Baby Gone (2007).

Alan Ladd will be remembered for all the stories he helped to make and will be dearly missed.

What is your favorite movie that Alan Ladd helped produce? Let us know what you think in the comments section below.

Comments Off on Alan Ladd Jr., Exec. Who Saved ‘Star Wars’ Dies at 84