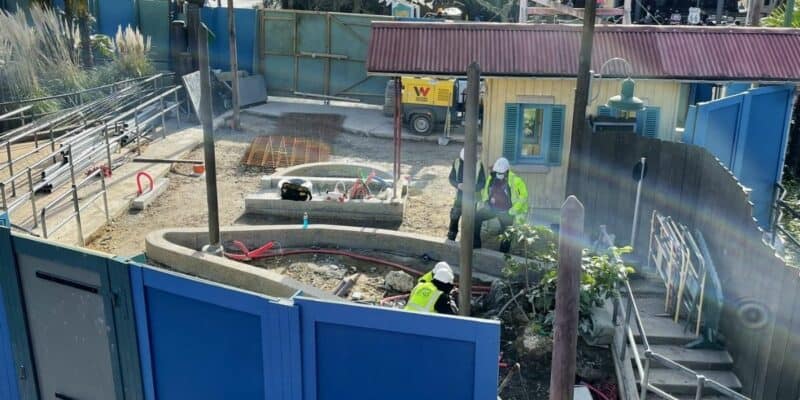 At the moment, Disneyland Pairs has a ton of attractions undergoing refurbishment. At the moment, there are a handful of shut-down attractions which are still getting updated or adjusted. For the month of February, Guests can expect to see the following attractions closed for their respective dates:

Crush’s Coaster, located at Walt Disney Studios Park, is one of the most popular attractions at the Park, but had been closed for a while due to ongoing construction. Although the attraction is now open, a lot of the entrance and queue remain demolished. With the 30th anniversary just a few weeks away, Disney is working hard to try and make all of their attractions ready for the big day. Luckily, Crush’s Coaster does seem to have some progress being done to the entrance.

DLP Report (@DLPReport) shared a photo of the ongoing construction.

The remodel of the Crush’s Coaster entrance and queue is making some progress!

🔧 The remodel of the Crush’s Coaster entrance and queue is making some progress! pic.twitter.com/b9hj8m0lkN

Although progress is being made, we can still see that there is a lot of work do be done on the coaster.

Disneyland Paris describes the ride as:

Crush’s Coaster: Finding Thrills in the Deep Blue Sea
Join Crush and friends in Toon Studio®, where you’ll find the beached soundstage and set of the Disney•Pixar film, Finding Nemo. Then, after taking in the Sydney Harbour scenery, board a turtle shell and prepare for a ride through memorable moments from the movie.
Sit tight, as your shell dives into the ocean and begins its incredible journey. At first Nemo, Squirt and other familiar faces greet you in the Great Barrier Reef. But the serenity doesn’t last for long, as you’re sent plunging to the deepest darkest depths, where a sunken submarine sits surrounded by voracious glowfish, jellyfish and sharks. At Crush’s Coaster danger lurks. However, just in the nick of time, the strong East Australian Current churns you up and sends you spiralling back to Sydney Harbour to a rousing reception.

Before Disney World and Disneyland implemented Disney Genie, we saw Disneyland Paris lead the pack with Premier Access. Premier Access is a pay-per-ride system that allows Guests to pick a return time for one of the rides available in Premier Access. Each ride has its own individual cost associated with it, and can only be used to skip the line once. These costs are meant to fluctuate depending on the season and the level of business at the Park. This goes for both Disneyland Park and Walt Disney Studios Park. The only other Disney Park that offers a Premier Access system is Shanghai Disney.

What do you think of the ongoing construction on Crush’s Coaster entrance?