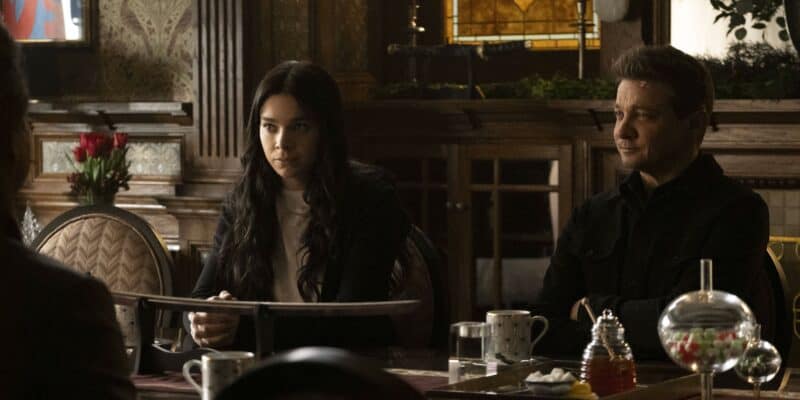 The Marvel Cinematic Universe has been lighting up Hollywood both on the small screen and in movie theaters. In 2021 alone, the MCU dropped five new Disney+ Original series — WandaVision, The Falcon and the Winter Soldier, Loki, What If…?, and Hawkeye — and several films, including the blockbuster Spider-Man: No Way Home on December 17.

Although Dalton ended up not ultimately taking the fall for Bishop’s evildoing in the series — the matriarch’s daughter, Kate Bishop (Hailee Steinfeld) had her mother arrested instead — it appears that scenes of Duquesne wearing jailhouse garb were filmed, as evidenced by a delete clip in the Hawkeye blooper footage.

As you can see [above], Duquesne is clearly clad in a prison jumpsuit in the newly released footage. As one recent article pointed out:

…there are a few shots involving Tony Dalton’s Jack Duquesne positioned in scenes that never made it into the show. While one includes a new shot of him with a sword, another features him in what appears to be a prison jumpsuit.

Since the snippet made it into the gag reel, it’s reasonable to believe there was a scene filmed after Duquesne was arrested for being framed by Eleanor Bishop (Vera Farmiga). While the gag reel itself is added to Disney+ under Hawkeye’s “Extras” tab, no deleted scenes have been posted as of this writing.

During a press conference prior to Hawkeye’s debut on November 24, 2021, Marvel Studios President Kevin Feige shared his excitement for the series, which set up an entirely new “street level” version of the MCU:

This [Hawkeye] is fun because it is a Christmas story that is taking place during the holidays, and it also is based on early discussions about a limited time period. About setting a series in, you know, not quite real-time, but essentially in a-in a six-day period. Six episodes, six days. Will Clint make it home for Christmas? Which was fun and a breath of fresh air after world-ending stakes and celestials bursting out of planets and Multiverse shenanigans that this is, like Hawkeye himself, a grounded family-based show.”

Did you enjoy Hawkeye Season 1?