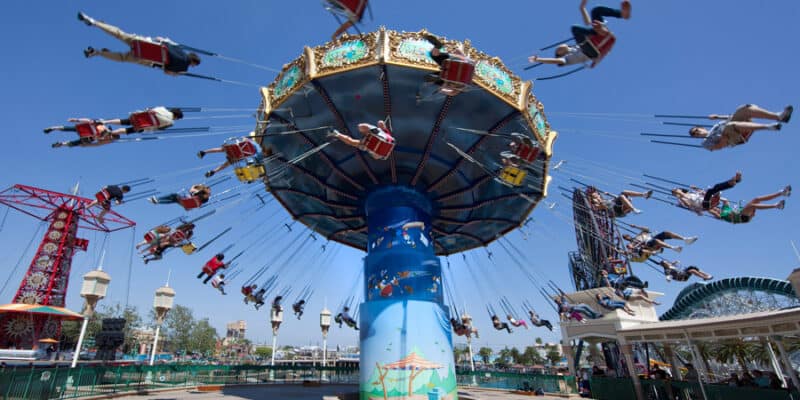 One thing we can all agree on is our love of the rides at Disneyland and Walt Disney World. Whether it’s splashing down on Splash Mountain, zooming through space on Space Mountain, or just taking a relaxing tour through the jungle in Jungle Cruise, the attractions at the Disney Parks really make the trip magical and fun. That is until they get stuck high up in the air in the Disneyland Park.

Everyone has that one ride that they’d rather not get stuck on. For those scared of the dark, maybe it’s Haunted Mansion or Pirates of the Caribbean. For others afraid of speed maybe it’s Rock ‘n’ Roller Coaster or Expedition Everest. For one unlucky Guest, heights were the ones that did it for them. A recent TikTok from Sarah Hernandez (@sarahhernandezofficial) showed the experience of one Guest getting stuck in Disneyland ride you wouldn’t want to be stuck in for very long. See the full video below:

In the TikTok, the Guest can be seen trapped high in the air on the Silly Symphony Swings ride. Of course, Disney Cast Members are well-trained for instances such as these and will be able to assist Guests out of any attraction safely.

More on the attraction here:

A Whirl of Fun!

Experience the carefree thrill of flying as this classic ride carries you aloft for breathtaking views of all the park excitement below.

As music swells and the colorful canopy rotates, your swing lifts you, then tilts you, then twirls you round and round—higher and higher.

Inspired by a Mickey Mouse Classic

Silly Symphony Swings puts an exhilarating spin on the fun of the 1935 cartoon, “The Band Concert.” This beloved short features Mickey Mouse as a harried conductor who keeps his orchestra playing—even as a tornado whisks them all high in the sky.

Your whirlwind adventure is set to the same symphonic theme as the cartoon—the stirring “William Tell Overture.”

If you’ve visited either Disneyland or Walt Disney World for any amount of time you know that getting stuck on a ride can be a common occurrence and to some, a right of passage. Getting evacuated off of a ride can be seen as a special event for hardcore Disney fans, letting them see what goes on behind the scenes of their favorite attractions.

Personally, I would love to get stuck and have to evacuate off of Expedition Everest. I just think it would be really cool to be at the top of the mountain and get to see all the behind-the-scenes stuff on the ride. I would never want to have to evacuate Haunted Mansion however, as I don’t want all of the illusions and trickery to be spoiled for me. What about you?

What is your least favorite Disney ride to get stuck on? Are you more afraid of heights or fast roller coasters? Which ride would you want to get evacuated off of? Let us know in the comments below!