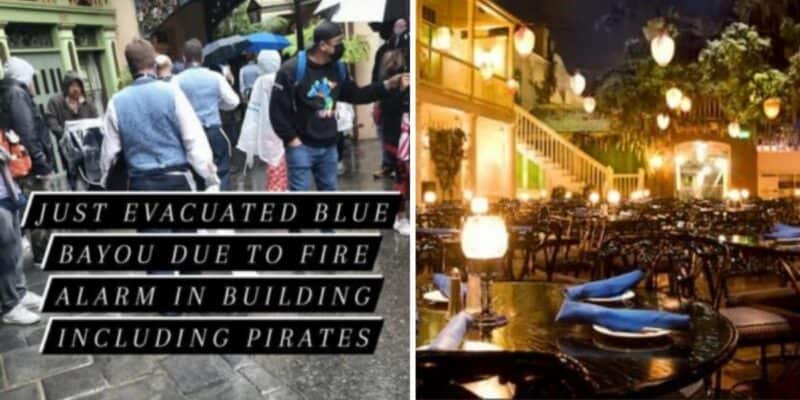 If you are ever visiting a Disney Park, it is rare that something will go wrong. That being said, even in a world of fantasy such as this one, Guests will sometimes experience real-world upsets.

We have written about attraction evacuations multiple times, but it is much rarer for a building or restaurant to be evacuated. Typically, if a ride breaks down and it is unsafe for the attraction to continue moving with Guests aboard, Cast Members will help get all Guests evacuated from the attraction. However, at a restaurant where there are not many technical issues, this is much less common.

That being said, it seems that this weekend, Disneyland Resort had to evacuate Blue Bayou at Disneyland Park. Disneyrealrich (@disneyrealrich) took to Instagram to post the evacuation story as it was happening. Inside, the Magic spoke with the Guest to further understand what went wrong.

I had got a reservation for Blue Bayou so I was really excited since it was my first time. Reservation was for 3 o’clock but waited a few minutes to get a rail spot. Got in ordered sparkling wine, had a few sips and a server came over to our server and whispered something in his ear. So we say what’s happening? He says fire alarm, we will have to start evacuating. So we end up being sent outside, out of New Orleans Square totally in the rain. According to the server, we will be let back in at some point and get our same table.

So after about an hour and 15 minutes, they let us back in only to be told to go back outside again so they can clear the tables, so we waited another 15 minutes until we finally got in. Had a good meal and was out by 530. We had heard from security that it was a fire alarm in Pirates so the whole building had to be evacuated including BB, and most of New Orleans Square. The picture I posted was of the servers evacuating the building.

Although we do not have photo evidence of the other evacuations noted, it does make sense that this would have been the chain reaction from the fire alarm for the Guests and Cast Member safety. Of course, Disney cannot control the weather, but being evacuated from one of the more expensive table service locations at Disneyland into the rain is not the best of luck, and often, not how Guests would imagine their meal going.

Disney describes the dining location as:

Dine Down on the Bayou
Step into perpetual twilight as the nighttime ambiance of the watery setting surrounds you. Spot Guests embarking on a Pirates of the Caribbean adventure, as you enjoy an authentic New Orleans-inspired lunch or dinner. It’s a truly unique setting where the bayou is, literally, by you!

A New Orleans Square Classic
Blue Bayou has been a must-visit destination for many Disneyland Resort Guests since its opening in 1967. Its mystical setting takes you into the heart of the South—overhead strings of colorful balloon lanterns cast an enchanting glow, dotting the darkness while crickets chirp, frogs croak and fireflies wink in the dark.

Big Tastes from the Big Easy
Kick off your memorable meal with Southern-inspired starters. Next, choose from a selection of authentic entrées—including signature dishes such as Jambalaya and Plant-based Cajun Cauliflower.

Have you ever had to evacuate anything at Disney? Let us know your stories below!