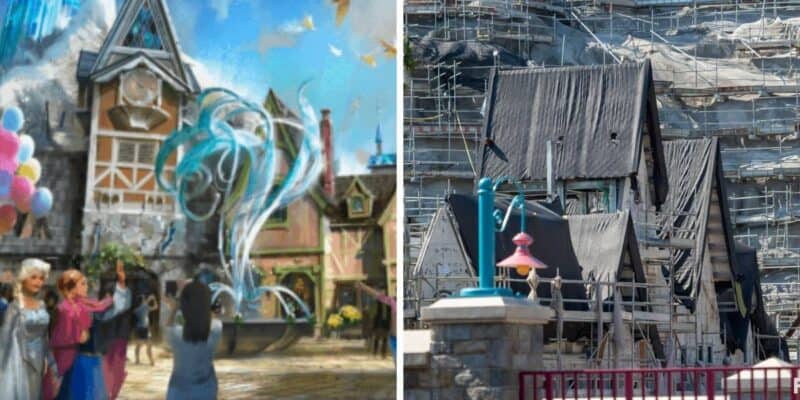 Fans of the record-breaking films, Frozen and Frozen 2, cannot wait for the day they can actually step inside the world of Arendelle when visiting the highly anticipated Frozen-themed land, coming soon to Hong Kong Disneyland.

Inside the Magic has been following along with the ongoing construction at Arendelle: World Of Frozen at Hong Kong Disneyland, and now, we can share that another milestone has been hit at the upcoming Frozen-themed land.

For starters, if you are not aware, the Frozen-themed land will be home to a stunning atmosphere, unique attractions, and may even allow Guests to bump into some favorite characters from Frozen, including Elsa, Anna, Olaf, and others.

Guests will also be able to see iconic landmarks from the record-breaking film, including Elsa’s ice palace! During the announcement of the Frozen roller coaster in August at the D23 Expo, Bob Chapek spoke on his excitement of the land, saying: “Soon Guests will be able to visit the kingdom of Arendelle with all of its sights, sounds, cuisines, and traditions.”

As construction continues on Arendelle: World Of Frozen, the village, which will sit inside Arendelle once the land opens, has just hit a major milestone.

Thanks to HKDL Fantasy on Twitter, we can see that the roof installation has begun at Arendelle: World Of Frozen. They shared some photos of the current state of the village, along with the caption:

Before the park closure, installation of roofs for village houses had begun at #ArendelleWorldOfFrozen.