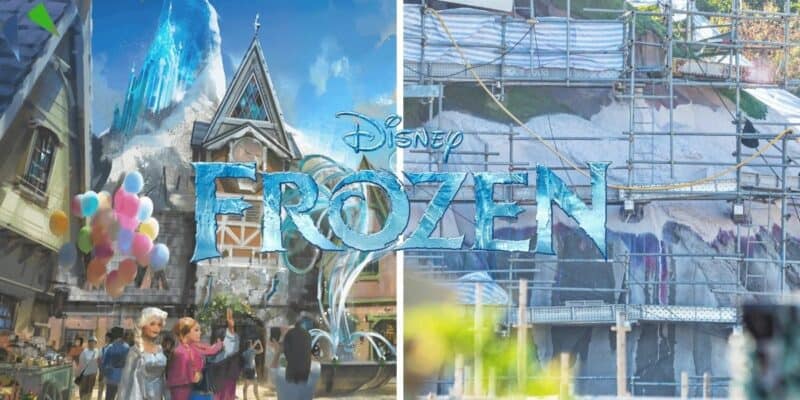 Who’s ready to go into the unknown? Disney is bringing the award-winning, record-breaking animated film, Frozen, to life with its highly anticipated Frozen-themed land, coming soon to Hong Kong Disneyland.

Inside the Magic has continued to update you on construction progress at Arendelle: World of Frozen, and now we have some exciting news to share! A major milestone has been hit as workers have officially begun applying paint onto the mountain range.

Fans of the record-breaking film, Frozen, cannot wait for the day they can actually step inside the world of Arendelle when visiting the highly anticipated Frozen land. The upcoming land, Arendelle: World of Frozen, will be home to a stunning atmosphere, unique attractions, and may even allow Guests to bump into some favorite characters from Frozen, including Elsa, Anna, Olaf, and others.

It will also be home to the iconic North Mountain from the film! And as we inch closer to completion, workers are beginning to apply paint to the mountain range structure.

HKDL Fantasy took to Twitter to share a photo of the mountain range in its current state, writing:

Painting has begun on the mountain range of #ArendelleWorldOfFrozen! 🏔

Are you excited for when Arendelle: World of Frozen opens in Hong Kong Disneyland? Let us know in the comments below.

If you want to visit Arendelle: World of Frozen at Hong Kong Disneyland when it opens, or visit any of the other Disney Parks around the world, be sure to get in touch with our friends at Academy Travel, who will be there with you every step of the way when planning your magical Disney vacation.

Comments Off on PHOTOS: Disney’s ‘Frozen’ Land Comes to Life as It Nears Completion