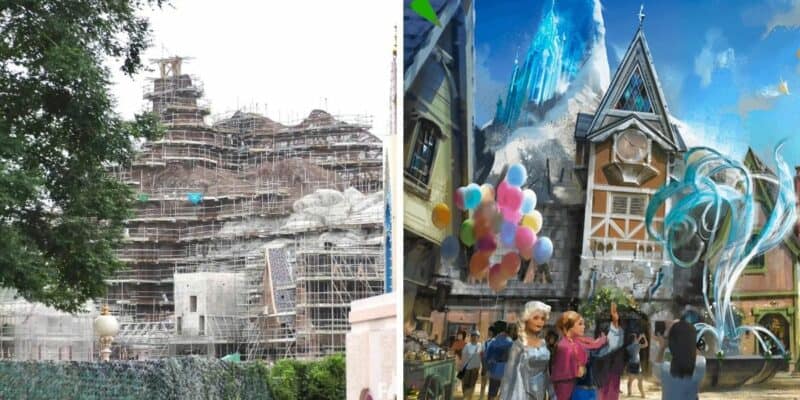 Construction has been continuing on the upcoming Frozen land at Hong Kong Disneyland for quite some time now. In fact, it wasn’t long ago that we reported on Wandering Oaken’s Sliding Sleigh rollercoaster construction at Arendelle: World of Frozen, as well as the iconic North Mountain beginning to really take shape.

Now, as we see the North Mountain continuing to form, we are also seeing the clock tower taking shape!

Fans of the record-breaking film, Frozen, cannot wait for the day they can actually step inside the world of Arendelle when visiting the highly anticipated Frozen land. The upcoming land, which will reside in Hong Kong Disneyland, will be home to a stunning atmosphere, unique attractions, and may even allow Guests to bump into some favorite characters from Frozen, including Elsa, Anna, Olaf, and others.

And as construction progresses on the land, we can now see the clock tower and its surroundings continue to take shape. Hong Kong Disneyland took to Twitter to share a handful of photos showing the construction. Per their Tweet:

At #ArendelleWorldOfFrozen, the Clock Tower and its surrounding roofs continue to take shape.

The North Mountain will be something that entices Guests to visit the area of the Park. Once inside, Guests can check out the Wandering Oaken’s Sliding Sleighs roller coaster, which will take Guests on a journey through Arendelle after they pay a visit to Oaken’s famous store.

Guests can also experience the upcoming Frozen Ever After attraction, which will be a replica of the EPCOT version in Walt Disney World.