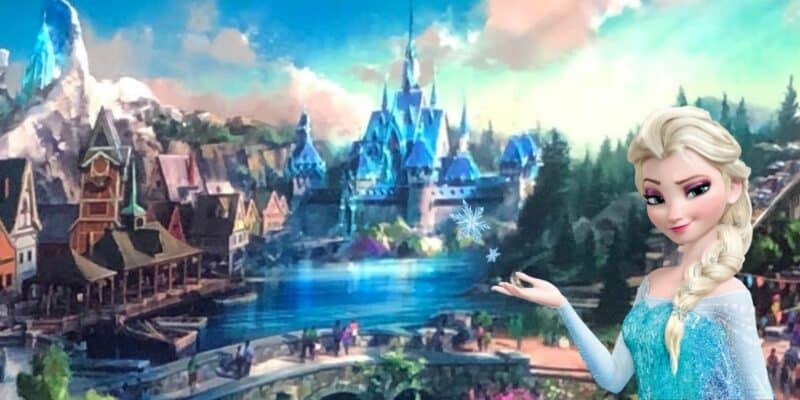 Have you ever wanted to travel into the world of Arendelle from Disney’s animated movie, Frozen (2013)? Well, you will soon be able to thanks to the upcoming Frozen-themed land coming to Hong Kong Disneyland.

The upcoming land, which will be called Arendelle: World Of Frozen, will be home to a stunning atmosphere, unique attractions, and may even allow Guests to bump into some favorite characters from Frozen, including Elsa, Anna, Olaf, and others.

Guests will also be able to see iconic landmarks from the record-breaking film, including Elsa’s ice palace! As construction continues on Arendelle: World Of Frozen, the possible construction site for where the ice palace will sit may have just been revealed.

Thanks to a new photo from HKDL Fantasy on Twitter, we can see that the construction is continuing quickly on the top of the North Mountain. If you look closely at the image, you can see a giant hole in the middle of the rock work, which may be where Elsa’s ice palace will sit!

At #ArendelleWorldOfFrozen, cement layer has finally reached the top of North Mountain, a big hole can also be seen in the middle of the rockwork, presumably where Elsa’s Ice Palace will sit.

At #ArendelleWorldOfFrozen, cement layer has finally reached the top of North Mountain, a big hole can also be seen in the middle of the rockwork, presumably where Elsa’s Ice Palace will sit.#hongkongdisneyland #HKDL #disneyparks #disney #香港ディズニーランド #Frozen #アナ雪 pic.twitter.com/LcejEentP0

In addition to spotting some of the iconic landmarks from the film, Guests will also be able to experience an identical version of EPCOT’s Frozen Ever After attraction. In case you aren’t familiar, Disney World describes this attraction as: