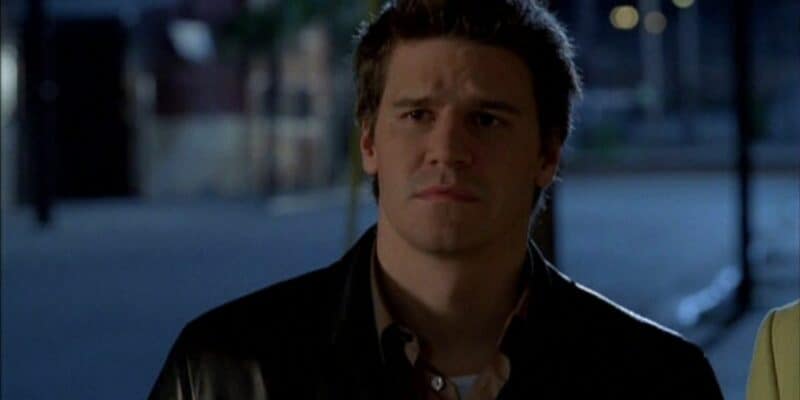 Buffy the Vampire Slayer (1997 — 2003) turns 25 years’ old this year, and while there are a couple of years before spin-off show Angel (1999 — 2004) gets to blow out the same number of candles, there’s still no better time to celebrate all things Buffy! 2022 also marks the release of Buffy the Vampire Slayer sequel-novel “In Every Generation”, so with the main show back in the spotlight, it’s only fair that we give Angel some love and attention.

Angel was also created by Joss Whedon and ran for five seasons before sadly departing our television screens (a grief that was even harder to tackle having already said goodbye to Buffy the Vampire Slayer the previous year), and like its mother show, gave us a roster of incredibly rich characters, some borrowed from Sunnydale, and others entirely new. It also had some great storylines, from vampires with souls to vampires made of foam and felt!

Here are all five seasons of Angel ranked from worst to best!

Well, one season has to be at the bottom, and though it wasn’t an easy choice, Season 2 makes the least impression of the five. It’s also plagued with some really annoying characters, such as vampires Darla (Julie Benz) and Drusilla (Juliet Landau), homicide detective Kate (Elisabeth Rohm), or Wolfram & Hart lawyers Lilah (Stephanie Romanov) and Lindsey (Christian Kane).

And with Darla back on the scene, Angel (David Boreanaz) takes dark brooding to a whole new level, firing his crew and going solo in a bid to take down his evil ex, and becoming unlikable in the process. With all that said, there’s still a lot to love about Season 2, as it introduces two of the best characters in the series – psychic demon Lorne (the late Andy Hallett) and Fred (Amy Acker).

It’s great to see more characters from Buffy the Vampire Slayer in the mix, but they get old quick (which is a surprise considering they’re vampires).

Season 3 might be low on our list, but that doesn’t mean we don’t like it (the same applies to Season 2). It’s heart-warming to see Angel become a father and bond with his newborn son, but unfortunately, an old enemy returns to punish him for the crimes he committed as the evil Angelus, and takes young Connor (Vincent Kartheiser) to a hell dimension!

To no surprise, this season gets depressing fast, and the episode in which Angel tries to kill Wesley (Alexis Denisof) is hard to watch. Fortunately, Connor soon returns, but as time moves differently in evil hell dimensions, he’s already 16 years’ old! At first, his actions are pretty understandable, but Connor quickly grows into one of the show’s most exhausting characters.

Season 3 certainly keeps you on the edge of your seat, but it’s unpleasant to watch Angel and Wesley’s friendship fall apart (why, Joss Whedon, why?!).

As we start to climb higher up our list, seasons tend to become less problematic. But while there are some great moments throughout Season 4, from seeing how truly manipulative Angelus is, to watching Faith (Eliza Dushku) break out of jail without a moment’s hesitation, we must also endure the total weirdness that is Cordelia (Charisma Carpenter) and Connor!

We get some great villains, though – The Beast is awesome, while an evil version of Cordelia is also entertaining to watch. Season 4 even gives us a third big bad in the form of Jasmine (Gina Torres), who delights us with her presence for a few episodes. The real downside of this season, however, is how obvious it is that Charisma Carpenter was essentially written out of the show.

What Season 4 lacks in coherent storytelling, it makes up for with its villains. And did we mention that our Blessed Devourer Jasmine is just incredible?!

Season 1 introduces us to LA’s demonic underworld and Angel’s first outings as he establishes a company that ends up giving even the Ghostbusters a run for their money! This is easily the darkest season of the bunch – – visually speaking, that is — as Angel’s early days see him work strictly by night to fight evil. Who needs Batman when they have the Dark Avenger?!

Angel has many family themes, and watching Angel, Doyle (Glenn Quinn), Cordelia, and Wesley bond as they battle the forces of evil together in Season 1 has no contest. The first season also has one of the most tear-jerking episodes, in which Doyle is killed (the actor has also sadly passed away since). If the last line in “Parting Gifts” doesn’t make you cry, we don’t know what will!

The first season of Angel makes a firm impression, and despite being a darker show, it never once feels like it’s living in the shadow of Buffy the Vampire Slayer.

After literally selling their souls to the devil in Season 4’s final episode, Angel Investigations relocates to Wolfram & Hart’s brand-new corporate office, which feels like it belongs in a James Bond movie! It’s refreshing to see the gang in lavish new digs, where each of them is in charge of their own department, with a wealth of resources at their disposal!

This time, all bets are off, as Angel, Spike (James Marsters), Gunn (J August Richards), Wesley, Lorne, and Ilyria (Amy Acker) take on the faceless Senior Partners. Season 5 is also home to the episode “Smile Time” (Angel’s answer to “Once More, With Feeling” from Buffy), in which Angel turns into a puppet! And the final scenes of finale “Not Fade Away” will give you chills.

The final season is a compelling watch, and though we don’t get to see the ‘Fall of Los Angeles’, with the screen cutting to black, it’s still a strangely satisfying end to the show.

All seasons of Angel and Buffy the Vampire Slayer are now streaming on Disney+, and “In Every Generation”, the new novel by YA author Kendare Blake, is available for purchase. Buffy creator Joss Whedon hasn’t been involved with the book, but as it follows the daughter of Willow Rosenberg (Alyson Hannigan), it would appear that it’s canon with the two shows.

What’s your favorite season in Angel?