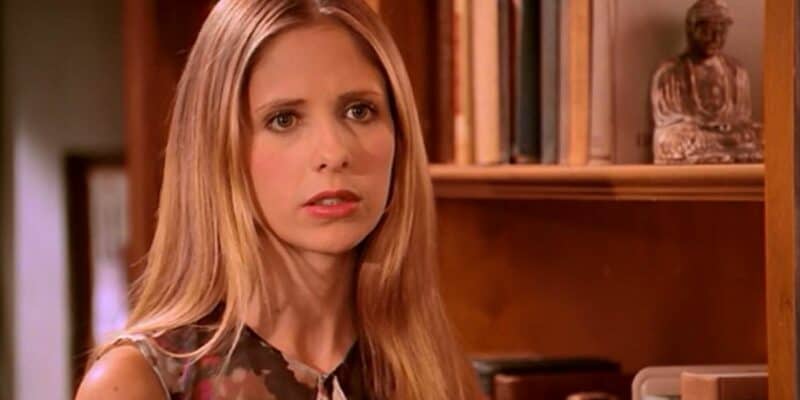 The Buffy the Vampire Slayer TV series (1997 — 2003) was a huge hit during its time on our television screens. It was the birthplace of many teenage crushes, and when it wasn’t making our hearts swell for its wonderful cast (which includes Sarah Michelle Gellar and David Boreanaz), it was driving a stake through them when it killed some of them off!

Joss Whedon’s show has recently found a new home on Disney+, alongside spin-off show Angel (1999 — 2004). And while it remains to be seen whether Disney intends to give Buffy the Vampire Slayer a makeover, there is a brand-new sequel to the show that comes in the form of a YA novel intended for a new generation of fans, titled, well, “In Every Generation” (2022)!

How many seasons does Buffy the Vampire Slayer have?

During the four seasons that follow their graduation at the end of Season 3, the Scooby Gang faces even greater threats, from bio-mechanical demons to ancient gods. New members are also welcomed along the way, such as ex-demon Anya (Emma Caulfield), Wiccan Tara (Amber Benson), vampire Spike (James Marsters), and Buffy’s sister Dawn (Michelle Trachtenberg).

Do you need to watch Angel to understand Buffy?

Angel’s first season ran alongside Buffy Season 4, so the show’s fifth and final season aired a year after Buffy Season 7 ended. As there are a number of crossover episodes, it’s recommended that you watch Angel as intended – one Buffy episode, then one Angel episode and repeat, until Buffy Season 7 is done. Then you’re free to enjoy 22 episodes of David Boreanaz without interruption!

What happens at the end of Buffy the Vampire Slayer?

Despite having graduated from Sunnydale High at the end of Season 3, that didn’t stop the Scooby Gang from returning to where it all started in the final season. With several Potential Slayers behind her, Buffy Summers leads an army to all-out war against The First Evil (the season’s ‘Big Bad’ and the baddest of all) beneath the high school.

The First Evil unleashes an army of ‘ubervamps’ onto our heroes, however, Buffy manages to destroy the enemy using an ancient Slayer weapon, while Spike sacrifices himself to wipe out the remaining vampires. The survivors escape as the school collapses all around them, and with it the whole of Sunnydale! Probably for the best, though.

Which characters die in Buffy the Vampire Slayer?

You’ve probably done your best to forget, but several characters are killed off throughout the show. Season 2 is really what gets the ball rolling, though, when Giles’ love interest Jenny Calendar (Robia Scott) is brutally murdered by Angelus — Angel’s evil alter ego! And in Season 5, we bid a heart-breaking farewell to Buffy’s mother Joyce (Kristine Sutherland).

And if that wasn’t enough, Buffy herself dies at the end of Season 5 (but is luckily resurrected just in time for the musical episode “Once More, With Feeling”). But despite its trio of goofy human villains, Season 6 delivers its own heavy blow when Willow’s girlfriend Tara is shot dead, while the Season 7 finale sees Anya die in battle!

What happens after Buffy the Vampire Slayer Season 7?

While Angel‘s Season 5 episode “The Girl in Question” offers a snapshot of what’s happening with the Slayer in the year that follows the Buffy Season 7 finale, there’s actually a series of Buffy the Vampire Slayer comic books that follows the Sunnydale survivors long after, which over the years have been published by the likes of Dark Horse Comics.

The first comic book that takes place after Buffy the Vampire Slayer Season 7 is actually subtitled Season 8, and is the first of many continuations of the beloved show. As seen in the finale, many Slayers have been ‘activated’ everywhere, so the Scooby Gang disperses to manage several groups all around the world to fight new threats. A hero’s work really is never done!

Are the Buffy comics canon?

Many fans consider the Buffy and Angel comic books to be canon, and the fact that they were originally overseen by the shows’ creator Joss Whedon definitely lends to this possibility (many of the character likenesses are also on point). However, as is the case with forms of media outside the realm of TV and film, it can also be a bit of a grey area.

Some of the comic books in question are set during or in between seasons of Buffy and Angel, and don’t appear to contradict any of the events seen onscreen. Ultimately, though, it may boil down to the fact that they’re canon to the shows, but not necessarily the other way round. Either way, there are plenty more vampire-centric adventures to sink your teeth into.

What is “In Every Generation” about?

“In Every Generation” is the first in a trilogy of YA novels by author Kendare Blake, and serves as a sequel-of-sorts to Buffy the Vampire Slayer. While it’s the first follow-up of any kind to the show that we’ve seen for some time, it’s not the first novel, as there have been several tie-ins and original works published since 1998.

The new book, however, follows Willow’s daughter Frankie Rosenberg, a sophomore at New Sunnydale High School. But while she’s still learning magic from her mother, Frankie soon realizes that she’s also the next Vampire Slayer. The book will be released on January 4 as part of Buffy the Vampire Slayer’s 25th anniversary (yes, we feel old too!).

Is “In Every Generation” canon?

Kendare Blake’s new novel “In Every Generation” certainly sounds like it’s canon, but like with the Buffy and Angel graphic novels, this isn’t entirely clear. With that said, it is the first time Disney has ‘acknowledged’ the Buffy the Vampire Slayer IP, and as it’s a continuation of the show and not a reboot, it’s more than likely canon.

After all, the book acknowledges many characters from the show. Not only is Frankie the daughter of Willow, the official synopsis also mentions Buffy and Faith, who are caught up in an attack on an ‘annual Slayer convention’. But whether the new book is accepted as canon or not, it’s still pretty exciting to see the Buffyverse brought back from the dead after so long.

All seven seasons of Buffy the Vampire Slayer and five seasons of Angel are available to stream on Disney+, while Kendare Blake’s new novel “In Every Generation” is on sale from January 4.

Will you be reading the new Buffy the Vampire Slayer novel “In Every Generation”?