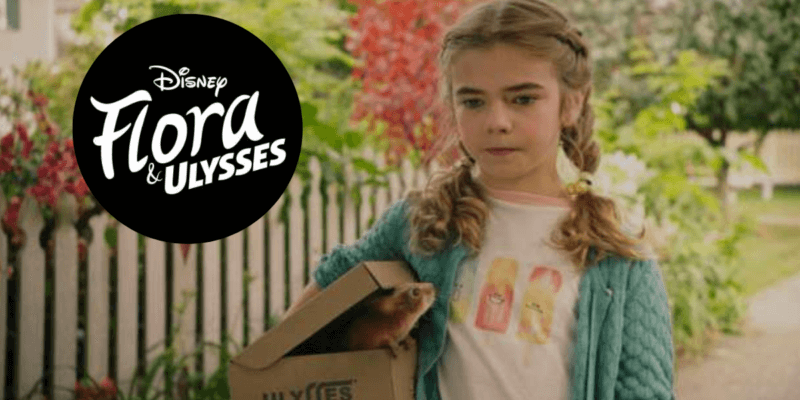 Disney+ is releasing a brand new original movie titled Flora & Ulysses. We were lucky enough at Inside the Magic to get a behind-the-scenes look at this exciting new film. Flora & Ulysses did, unfortunately, experience a delay in post-production due to the pandemic like so many other TV and movie projects. But not to worry! This new film debuts next month on Disney+! We are so happy to share a few details of this new movie as well as the official trailer. Let’s jump into it!

Inside the Magic was able to visit the film set in Vancouver Canada a few days before they ended filming in August of 2019 – just 3 days before Ben Schwartz’s post below. We were lucky enough to meet the stars of the film, Ben Schwartz, Matilda Lawler, and Alyson Hannigan! They were awesome and we cannot wait to see all of their hard work when Flora & Ulysses debuts on Disney+.

Related: ‘Raya and the Last Dragon’ Coming to Disney+ and Theaters Similtaniously!

After 2 months & 44 shooting days we’ve wrapped the @Disney movie Flora & Ulysses. We weren’t allowed to take photos on set or in costumes, so here’s a shot after we wrapped of the film’s star, Matilda Lawler & her movie dad celebrating our beautiful funny & heart warming film. pic.twitter.com/lIoQ2CINXK

I can personally attest to the chemistry between Ben Schwartz and Matilda Lawler during the filming as it was abundantly evident while I was on set. As I look for those subtle signals of movie-making magic I can’t help but think it will be the bond among that cast that enhances the magic in the movie.

Here is a bit about the story from Disney to help get you in the zone for what to expect from this humourous family-friendly adventure movie:

Disney’s “Flora & Ulysses” is a comedy-adventure based on the Newberry Award-winning book about 10-year-old Flora, an avid comic book fan and a self-avowed cynic, whose parents have recently separated. After rescuing a squirrel she names Ulysses, Flora is amazed to discover he possesses unique superhero powers which take them on an adventure of humorous complications that ultimately change Flora’s life–and her outlook–forever

Take a first look at the trailer for Flora & Ulysses below!

This movie will be coming out on Disney+ February 19, so grab the family and some popcorn! Stay tuned to Inside the Magic for more details on Flora & Ulysses.

Are you excited for Flora & Ulysses to debut on Disney+? Let us know in the comments!