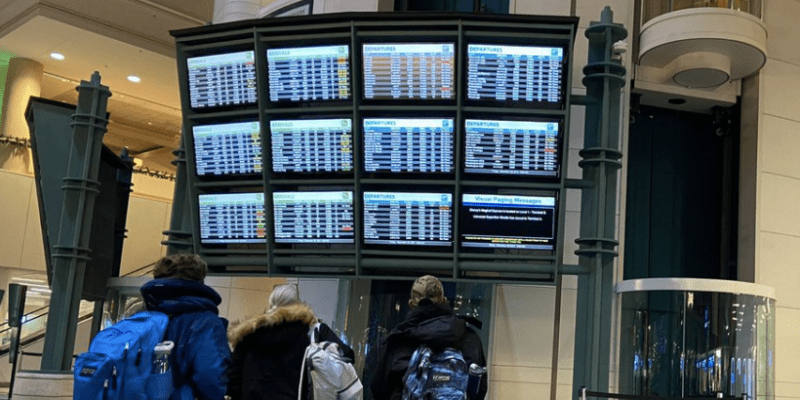 The holiday season is one of the busiest times of the year for the travel industry, and this year, things have become especially chaotic with the recent surge of the COVID-19 Omicron variant.

Now, major airlines are canceling hundreds of flights nationwide, leading to complete chaos for travelers, including some who might be trying to spend Christmas and New Years’ weeks at Walt Disney World Resort.

United and Delta have canceled more than 200 Christmas Eve flights as a surge in COVID-19 cases impacts their staff, the airlines said Thursday. The cancellations came as the Transportation Safety Administration said the number of people traveling for the holiday is returning to pre-pandemic levels.

“The nationwide spike in Omicron cases this week has had a direct impact on our flight crews and the people who run our operation,” a United Airlines spokesperson told CBS News in a statement. “As a result, we’ve unfortunately had to cancel some flights and are notifying impacted customers in advance of them coming to the airport.”

Hundreds of @Delta + @UnltedAirlines flights canceled across the country on this #ChristmasEve, we’ve counted 13 cancellations & some other delays here at @MCO this AM. #holiday #flights #Travel @MyNews13

Hundreds of @Delta + @UnltedAirlines flights canceled across the country on this #ChristmasEve, we’ve counted 13 cancellations & some other delays here at @MCO this AM. #holiday #flights #Travel @MyNews13 pic.twitter.com/QpPnqWFmW9

A Spectrum News article about the holiday travel issues at MCO shared a quote from one traveler who is presumably in town to visit the Parks:

“Uh, it’s a mad house,” said traveler Rosa Padilla. “I mean you look at everything and you go ‘yikes!’ but you know we have no family here, it’s just that we love Orlando. We love Disney World. So we generally come two to three times a year.”

The article also noted that, in addition to Delta and United cancelations, Alaska Airlines has reportedly canceled several flights into MCO this weekend.

Related: Fly Direct From Disney World to Aulani in 2021!

If you have plans to visit Walt Disney World Resort for Christmas or New Years, contact your airline directly for the most up to date information regarding your flight status.

Have your holiday travel plans been impacted by the recent rash of flight cancelations?