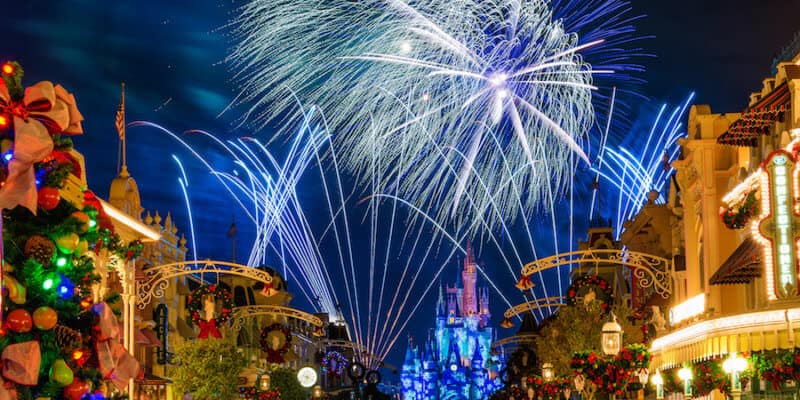 2021 is fast approaching! If you are staying in Orlando and wondering where you can celebrate New Year’s Eve, we have some ideas for you! Typically fireworks would be lighting up the sky, but due to the ongoing pandemic, firework displays are few and far between. Here is what you can expect regarding fireworks on NYE in Orlando and the surrounding areas.

Disney World is known for their over the top firework displays, which they call “nighttime spectaculars.” Unfortunately, at Walt Disney World, there will not be any fireworks displays on NYE. We previously reported that Disney is opting for a virtual fireworks experience this year in light of the ongoing pandemic.

Disney is closing all of its theme parks well before midnight on NYE. Guests staying at a Walt Disney World Resort will be able to view pre-recorded fireworks displays in their rooms this year. You can read more details about NYE at Disney here.

Some Disney World bars and lounges will be open until 1 am on New Year’s Eve including, AbracadaBar, The Enchanted Rose, and Tambu Lounge to name a few. You can read a full list here. This offers a place outside of your hotel room where you can ring in the new year during your Disney World vacation.

Universal Orlando Resort will not be holding its massive New Year’s Eve party called “EVE” this year, and both of its theme parks will be closed before midnight. We reached out to Universal for confirmation if they were setting off any kind of pyrotechnics at CityWalk. They stated they had no information at this time to share about New Year’s Eve celebrations at the parks or CityWalk.

However, if you are staying at a Universal hotel over the new year you will still have a great time! Universal is holding special party events at each of their hotels that are currently open for New Year’s. You can also enjoy special menu items at many restaurants located inside of CityWalk as an NYE treat! Check out the Universal website for more info.

While this may be outside of Orlando, Legoland will be hosting a fireworks display for NYE! If you want to make the drive and see fireworks during your Orlando vacation this is a great option. Especially if you have smaller children, as the Legoland theme park is geared towards little ones. You do not need a reservation to get into Legoland, just a ticket. But with the park being the only one to host live fireworks this year, we suggest purchasing a ticket sooner rather than later.

Of course, families should always be aware of the risks when visiting the Orlando theme parks and other public places as the pandemic is ongoing. No matter how your family celebrated the coming of the new year, we hope you do it safely and have a great time!

How will your family be celebrating New Year’s Eve in Orlando? Let us know in the comments!