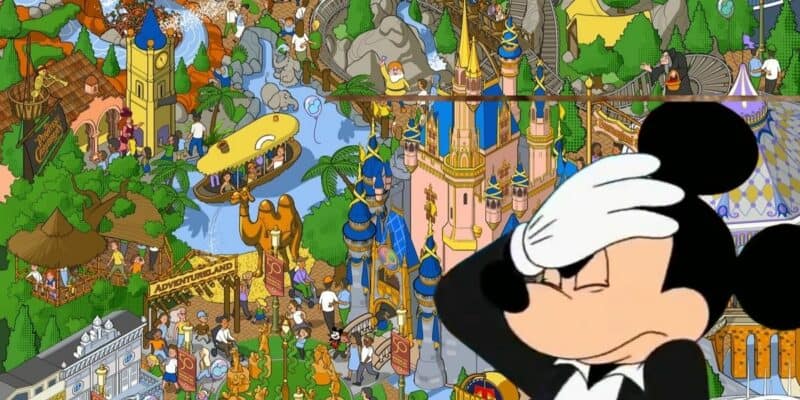 Walt Disney World’s 50th anniversary celebration is here – and with it a whole array of new experiences, merchandise, and surprises both in the Parks and online.

From the Beacons of Magic at Magic Kingdom, EPCOT, Disney’s Hollywood Studios, and Disney’s Animal Kingdom, to new attractions like Remy’s Ratatouille Adventure and the error-prone KiteTails, Disney has introduced a range of new experiences for Guests to enjoy.

Now though, it seems even the official Disney social media channels can keep up with their numerous Resorts and attractions, with a new post featuring multiple errors.

The Walt Disney Company has numerous social media accounts across its various divisions. From theme parks like Walt Disney World Resort and Disneyland Resort in California to the Disney+ streaming service to ABC News and ESPN, there are dozens of verified Disney accounts on various social platforms like Twitter, Instagram, TikTok, and Facebook.

Just this week, we reported on how one verified Twitter account for the Disney|ABC Photo department came out of a nearly two-year hiatus for a strange public berating of a Disney fan site for not featuring a photo of Walt but instead showcased two former Walt Disney Company CEOs —  Bob Iger and Michael Eisner. The post read:

And where is the photo of Walt Disney? This is a terrible oversight. Walt Disney was a genius and truly loved America and the world. Please update your post!!

Now, another bizarre post from the official Disney Twitter page itself has caused a stir online, as it features numerous errors related to the Walt Disney World Resort’s Magic Kingdom Park.

The Walt Disney Company posted a fun piece of artwork representing a map of the Florida Resort’s Magic Kingdom.

The map is colorful, unique, and includes multiple characters like Mickey Mouse, Minnie Mouse, Winnie the Pooh, and Tigger:

At Magic Kingdom Park at @WaltDisneyWorld Resort, there’s always something to celebrate! #DisneyWorld50

While featuring fan-favorite rides like Haunted Mansion, Jungle Cruise, and Big Thunder Mountain Railroad, there are also some noticeable errors in the map – attractions and signs that are from the Disneyland Park in Anaheim.

For example. the Splash Mountain featured in this map of Magic Kingdom is actually Disneyland’s Splash Mountain attraction, shown by the drawing of the single file flume configuration.

Additionally, the Tomorrowland sign and Astro Orbiter in Disney’s map of Walt Disney World are of course those from Disneyland.

Noticeably the famous Monorail and Tomorrowland Transit Authority Peoplemover do not feature, as well as half of Main Street U.S.A. and the main entrance hub.

The artist of the new Magic Kingdom artwork is unknown at this time, but it is a fun celebration of Magic Kingdom’s 50th birthday.

EARidescent magic for Disney World’s 50th celebration is everywhere you look when you enter the Resort based in Florida. The Resort was officially opened by Walt’s brother Roy Disney back on October 1, 1971, and has made a huge impact on the Orlando area.

One Twitter user, Greecian, responded humorously to the map by comparing it to a “Where’s Waldo?” book:

We are yet to see artwork shared for EPCOT, Disney’s Hollywood Studios, or Disney’s Animal Kingdom, but it will be interesting to see Disney’s interpretation of those Parks after these interesting errors.

What do you think of the new artwork for Walt Disney World’s 50th celebration?