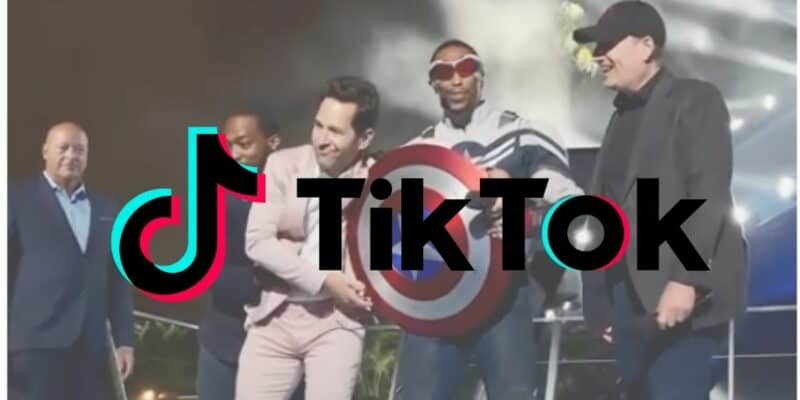 Disney Parks joined TikTok — the latest social media and Internet sensation that has completely taken over everyday lives — in October 2020. Ever since, they have been sharing exciting news updates, behind-the-scenes moments, and joining in on fun new trends.

A new trend is going around, asking TikTok users what their most viral video of 2021 was, and Disney Parks has officially joined in.

Disney Parks recently shared their most viral TikTok video for 2021 to the social media platform, which was actually the video they captured during the opening ceremony of Avengers Campus at Disney California Adventure!

Chairman of Disney Parks, Experiences and Products, Josh D’Amaro, was at the opening ceremony at Disney California Adventure to kick off the special event, who was later joined by Marvel President Kevin Feige and John Favreau, director of the original Iron Man.

Disney fans were then in for a surprise of a lifetime when Marvel actors Paul Rudd (Scott Lang/Ant-Man) and Anthony Mackie (Sam Wilson/Falcon/The new Captain America) came out on stage.

You can check out the TikTok video below.

During the opening ceremony of Avengers Campus, Paul Rudd was asked what his favorite party about the land is, to which he said:

“I’m a little biased, but in my humble opinion, I think the best part is the Pym Test Kitchen. They probably don’t know this, but originally I had suggested it be called the Lang Test Kitchen, but I guess those emails never went through. They passed. No big deal, we’re a team. Their loss. Doesn’t matter, food’s great.”

Marvel President Kevin Feige also said that Avengers Campus will never be complete, meaning if you have already visited the newly opened land, make sure you come back as there will always be new things to experience:

“Avengers Campus will never be completed. It’s a living, breathing space that will grow and evolve as our cinematic Universe grows and evolves. With new props and new characters assembling here at Avengers HQ.”

If you missed it, you can watch the full video replay of the Avengers Campus opening ceremony by clicking here.

Disney is also planning on opening a second Avengers Campus in Disneyland Paris, which is currently under construction.

If you aren’t already, be sure to follow Disney on TikTok — @DisneyParks.

Did you tune into Disney Parks during the opening ceremony of Avengers Campus? Are you surprised to see this as their most viral video of 2021? Let us know in the comments below.