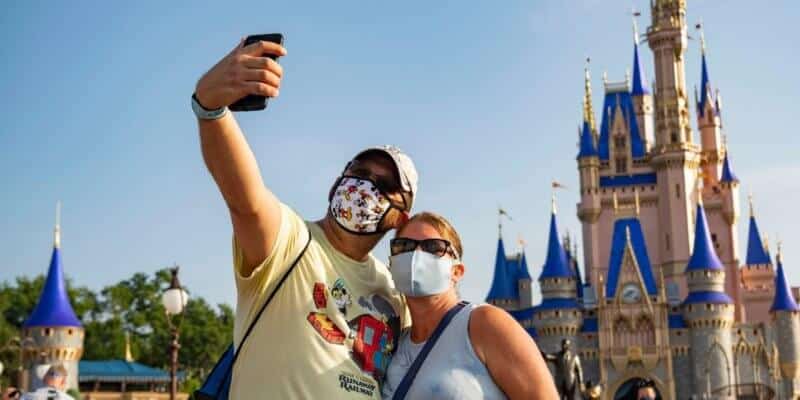 Disney Parks have seen a lot of changes and regulations introduced since their phased reopenings during the pandemic.

From plexiglass separators to social distancing markers, Guest experiences at both Walt Disney World and Disneyland Resort have been altered for the health and safety of Guests and Cast Members.

Now, it seems one of these regulations will be staying longer than planned, due to the new Omicron strain of COVID-19.

The previous federal mandate requiring face coverings on all transportation was set to expire on January 18, 2022.

The recent strain Omicron has now blocked travel into the United States from African countries. As CNN reports:

Major travel destinations including the European Union, Japan, Australia, the United States and Canada have moved to block flights from African countries following the discovery of the Omicron variant, echoing previous emergency responses that triggered a global freeze on travel.

This new travel ban evidently affects travel plans for many to Walt Disney World, Disneyland in California, and many of the other international Disney Parks around the world. Travel restrictions were lifted on November 8 for certain international countries such as the U.K., Brazil, China, and those in Europe.

As well as extending the mask mandate, The White House is once again tightening travel rules to and within the United States, requiring all in-bound international passengers to test for COVID-19 within 24 hours of departure.

The changes were announced as part of the reaction to the Omicron strain, as the world enters the third year of the pandemic. The U.S. confirmed its first case of the variant this week in Northern California.

The stricter pre-departure testing protocols will apply to all inbound international travelers regardless of vaccination status and will begin as early as next week.

“Our doctors believe tightening testing requirements for pre-departure will help catch more cases, potential cases of people who may be positive and inside the country. And so now is the right time to do it. And we can implement it very quickly.”

COVID cases and positivity rates are currently dropping in both Florida and California, with both theme park Resorts now allowing Guests to remove their masks while outdoors, but while inside, they must keep them on at all times unless actively eating or drinking.

Visit the official Walt Disney World Resort and Disneyland Resort websites for the most up-to-date information regarding face mask regulations.

What do you think about the mask mandate being extended?