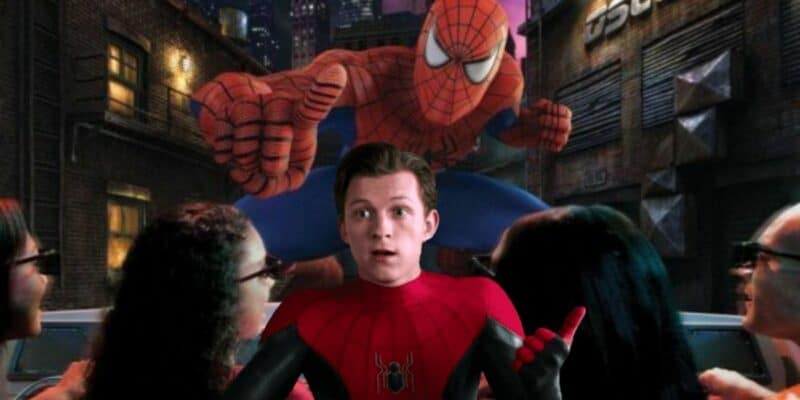 If you have ever been on The Amazing Adventures of Spider-Man at Islands of Adventure in Universal Orlando Resort, you may have noticed that the plot of the attraction looks a little similar to what Marvel and MCU fans can expect in Spider-Man: No Way Home.

Now that the Spider-Man: No Way Home trailer has dropped, fans cannot wait to see what will happen in the film. The third installment of Tom Holland’s Spider-Man follows the success of Spider-Man: Far from Home (2019) and Spider-Man: Homecoming (2017). The film will debut on December 17 worldwide; however, U.K. audiences will get an early preview with a December 15 debut date.

As we have recently noted, the trailer which debuted yesterday confirmed that with the opening of the Multiverse, Spider-Man will be facing villains from a variety of Spider-Man universes – including Tobey Maguire and Andrew Garfield’s previous villains.

Typically, we see Spider-Man face off with one main villain in the films, or maybe two at most. Still, to see four of them confirmed in one film, with the potential of more to come, it seems that Holland’s character is quickly overwhelmed with the abundance of evil that he must face all at once.

When riding The Amazing Adventures of Spider-Man, the Spider-Man in the attraction seems to be well-equipped to face off with five major villains, even when they team up. In the ride, Guests join the web-slinging hero as he defeats Doctor Octopus, Scream, Electro, Hydro-Man, and the Hobgoblin. Although we do not have the exact same villains overlapping in Spider-Man: No Way Home, many theme park fans are already beginning to call the film the live-action rendition of the Universal attraction due to the carousel of villains that appear!

Anybody wanna ride the amazing adventures of spider-man after that trailer?
@UniversalORL you in? #SpiderMan #universalorlando

Anybody wanna ride the amazing adventures of spider-man after that trailer? @UniversalORL you in? #SpiderMan #universalorlando

Season of the Grinch (@AxelRadman) is ready for a live-action of the attraction:

Of course, the film will have its own story in the Marvel Cinematic Universe, one that director Jon Watts was rewriting while filming, but it does have some similar qualities to the attraction! In another universe, perhaps Holland could use a hand from the attraction’s Peter Parker; he clearly has dealt with this before!

What do you think? Are there similarities between the ride and the film?