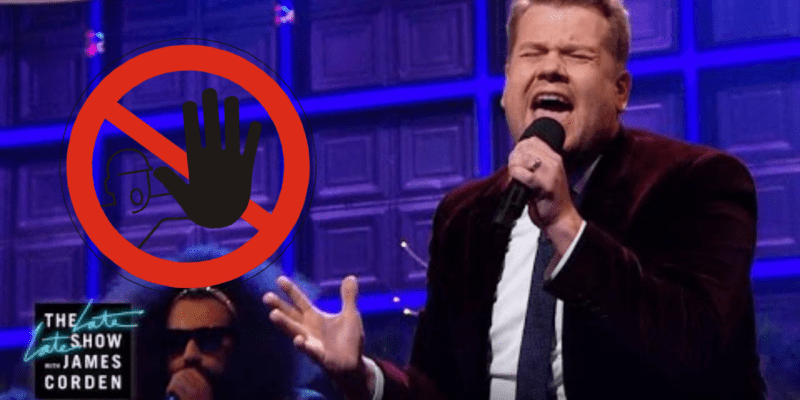 All movie adaptions of fan-favorite musicals, with stellar casts and eagerly-awaited releases.

And what do they all have in common? Each musical film stars James Corden.

Now, musical fans are petitioning producers behind a movie adaptation of another hit musical to not cast James Corden.

It was recently revealed that the movie adaption of the hit musical Wicked has finally got some progress, with the major casting announcement that Cynthia Erivo and Ariana Grande will be playing Elphaba and Galinda respectively.

The Wicked movie has been in the works since way back in 2004 when Glee star Lea Michele was originally thought to be starring the highly anticipated adaption. The original stage production starred Kristen Chenoweth and Frozen‘s (2013) Idina Menzel.

Universal’s Wicked is set to be directed by In the Heights (2021) and Crazy Rich Asians (2018) director Jon M. Chu and will begin production in June 2022 over in the U.K.

Once the leads were revealed, James Corden started to trend on social media with fans speculating that he would star in yet another musical movie.

A petition was started on Change.org and is addressed directly to Universal. The petition has already racked up over 64,000 signatures, and simply states:

James Corden in no way shape or form should be in or near the production of Wicked the movie… that’s pretty much it.

The animosity toward Corden seemingly stems from his continual appearances in recent stage-to-screen adaptations of beloved musicals, including his role in Tom Hooper’s widely panned Cats, Ryan Murphy’s The Prom, Rob Marshall’s Into the Woods and Amazon’s recently released Cinderella starring Camila Cabello.

His work is often reviewed as being too comedic or out-of-place for the roles he recreates in the musical movies. Corden’s promotional work for Cinderella, which he also co-produced, caused a stir after a clip of The Late Late Show star dressed in a rat costume and thrusting his groin at unsuspecting commuters stuck in L.A. traffic went viral.

While Corden has his detractors, he also has fans in the theater community. He won a Tony in 2012 for One Man, Two Guvnors and also hosted the Tony Awards in both 2016 and 2019.

The rest of the cast for Universal’s Wicked has yet to be announced, so we will have to wait and see who will star as Fiyero, Nessarose, and The Wizard in the movie adaption.

He is known for his viral videos of Carpool Karaoke with various celebrities and Crosswalk Musicals on The Late Late Show.

What do you think of James Corden being in Wicked? Let us know in the comments.