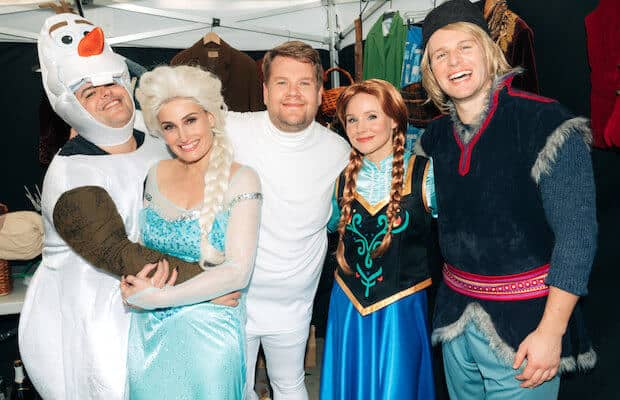 Just recently, we shared the fabulous performance from Kristen Bell and Jimmy Fallon as they sang the history of Disney songs together. Well, Bell and her Frozen 2 co-stars are back on the small screen. This time, with a James Corden Crosswalk musical performance.

If you’re a James Corden fan like we are, you’re in for another treat. Crosswalk the Musical: Frozen is loaded with all his usual shenanigans and hysterical interactions with the already funny cast of the movie. This time, he takes to the unfrozen intersection of Beverly Boulevard and Genesee Avenue in Los Angeles for a very chaotic, yet memorable performance of our beloved musical Frozen.

The Actors get Cast

Just like with Corden’s other Crosswalk performances, we start with the cast anxiously awaiting to hear which part they got cast for. Josh Gad, the voice of our favorite snowman Olaf, is no stranger to Corden’s productions. He shares with viewers in his most sarcastic, yet serious tone: “This is actually my third time joining James in the crosswalk, but you know what they say. Fool me once, shame on you. Fool me twice, shame on me. Fool me three times, shame on you… again. That’s how it works.” Thankfully, he does, in fact, get cast as the adorable snowman he voices, Olaf!

The rest of the cast get their parts as they play them in the actual movies. That is until James announces the part of Queen Elsa. This is when things get a little, shall we say, exciting! James proclaims that HE will be playing the part of Elsa and all bets are off at this point.

After the first scene, Kristen expresses her seemingly genuine concern for her co-star Idina and begs the cast to allow her to play her part as Queen Elsa. James and Idina have a sing-off, and we know you can imagine how that goes down.

This crew of Broadway veterans sure knows how to bring the show to life! And the hilarious “behind-the-scenes” moments are what we call must-see-TV!

If you need a good laugh, watch the video below. And don’t forget to catch the actual movie, Frozen 2 that comes out November 22 in theaters everywhere.

Have you gotten your tickets yet? What are you most excited about in Frozen 2? Let us know in the comments.