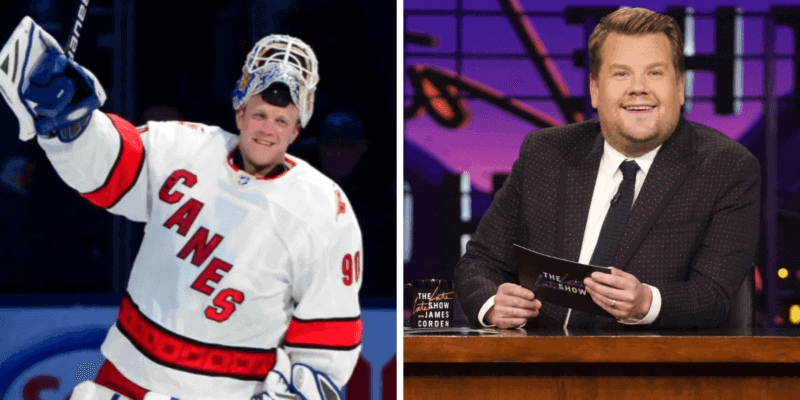 “Is your story going to be a Disney movie?”

It is an incredible sports story, really, like no other. A combination of Rudy, Invincible, and Miracle on Ice (or maybe more Mighty Ducks). It is a true story, and it’s rumored Disney is going to make a movie out of it with James Corden.

In the 2019-20 NHL season, a Zamboni driver got to live his dream as an NHL goalie, and he helped his team win the game. Yes, Seriously.

42-year-old David Ayers, the emergency back-up goalie on-hand for a game between the Toronto Maple Leafs and the Carolina Hurricanes, was called into action. Having never played higher than Junior Hockey, Ayers had to mind the net against the Leafs for the last one and a half periods of the game.

An Ontario resident and frequent participant at Leafs’ practices, Ayers took to the ice to a packed arena. And even though he was playing against his home team, his fellow Leafs fans–pure hockey fans at heart–were cheering him on!

Check out this 4-minute recap of the night!

Ayers would become an overnight sensation. This emergency back-up goalie would be flown down to Raleigh to receive the keys to the city, he got to meet the NHL Commissioner Gary Bettman, and his goalie stick is in the NHL Hall of Fame, among other things.

Appearing on the PP1 Podcast to talk about the experience, Ayers’ wife Sarah reportedly confirmed that there is something happening at Disney, and James Corden might be involved. The movie talk begins at the 21st minute of the podcast.

“There were talks about a book and a documentary,” she said, ” and the next thing we knew we got a call saying they wanted to do a movie about it.” Sarah said they listened to “about ten different producers” and that he (David) ended up going with James Corden as producer. She then said that Corden ended up talking to his neighbor who is “very high up in Disney.”

The Podcast host asked, “Is your story going to be a Disney movie?”

Sarah also clarified that the project is in the early writing stages, and constant discussion is happening between David and Corden. She also said that she and her husband would probably get a say when it comes to casting.

According to NHL rules, once teams have lost their starter and backup goaltender, they “shall be entitled to dress and play any available goalkeeper who is eligible.” In cases like Ayers, teams keep one on hand to be used for either team, and the title is more of a name than anything else. No emergency back up has ever gotten so much playing time in a game. It was unprecedented.

Let’s be honest, 42-year-old Zamboni driver who grew up playing and loving ice hockey gets the chance to play on the NHL stage at Air Canada Centre (the NHL equivalent to playing baseball in Yankee Stadium)? And he wins the game?! Who wouldn’t want to watch that movie?

But unfortunately–especially for this writer–we still need to take this with a grain of salt until we hear official word from Disney itself.

Disney has already released the schedule for several movie and series releases, including those from Marvel, live-action adventures from Walt Disney Studios like Cruella and Jungle Cruise, animated features from Pixar and Walt Disney Animation Studios. But it has been a while since Disney tugged at our heartstrings with a sports epic. Hopefully, that drought will end with the telling of this incredible true story.

What do you think? Would you want to see this story hit the big screen? Let us know in the comments!

Comments Off on Is Disney Working on a Hockey Movie with James Corden?