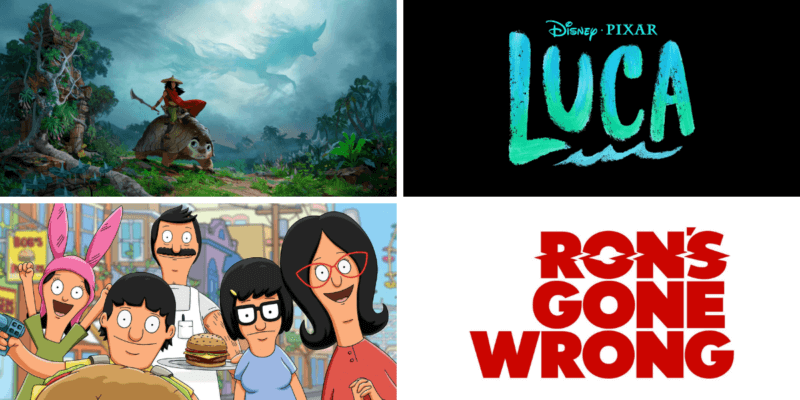 Like 2019 and 2020, 2021 is setting up to be another historic year for the Walt Disney Company regarding its motion picture studios.

While 2019 brought historic box office revenue, and 2020 brought historic shutdowns and delays, 2021 will see a historic level of “catch up” as the Hollywood giant releases four new animated features in the span of just over three months. Each film, however, comes from a different studio that now sits beneath the Disney corporate umbrella.

According to Disney’s film schedule, Walt Disney Animation Studios will go first, releasing its highly-anticipated feature Raya and the Last Dragon on March 12. 20th Television will follow releasing the feature-length film of its animated series Bob’s Burgers on April 9. Locksmith Animation–a young British studio–will go next, releasing its film Ron’s Gone Wrong about an 11-year-old boy and his relationship with his friend who is a robot. Pixar will be pulling up the rear with the release of its heart-warming buddy picture Luca.

The only other animated film currently in the line up is Disney-Pixar’s Soul starring Jaime Foxx, but that is still set to be released in theaters in November of 2020. Raya and the Last Dragon, Bob’s Burgers, and Ron’s Gone Wrong were all also originally slated to be released in 2020, but due to the shutdowns surrounding the pandemic were pushed back a year.

2021 is also going to be a busy year for Disney and its movie studios outside of animation as live-action remakes, Marvel movies, and more squeeze into the upcoming year for a release:

Which movies are you most looking forward to seeing next year? Let us know in the comments!