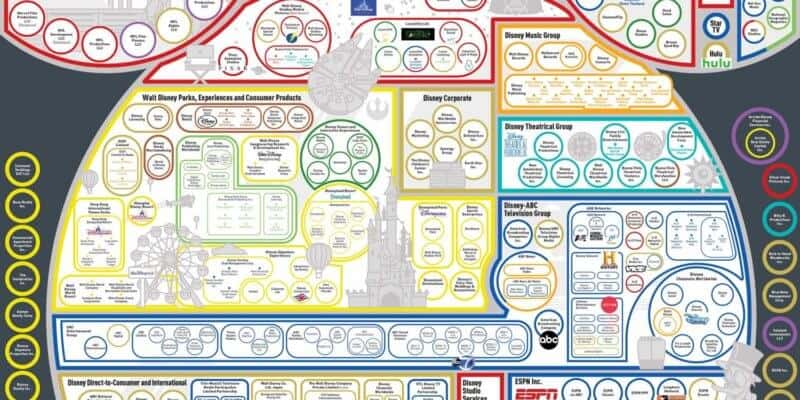 “I hope we never lose sight of one thing: that it was all started by a mouse.” -Walt Disney.

Yes, it was all started by a mouse, and today, November 18, we Disniacs take time to remember that and celebrate the day Mickey and Minnie came into our lives. With the help of his brother, Roy, animator Ub Iwerks, and dozens of other talented people, Walt Disney built a company, a household name, and an empire that has stretched across virtually every aspect of the entertainment industry. It’s no surprise that The Walt Disney Company has grown extensively since the release of Steamboat Willie. But just how big is it?

But what’s even more impressive than Disney’s physical size is its financial might. After the launch of Disney+, the company’s stock price broke $150/share for the first time in its history, hitting a record closing price of just over $148/share. And in the past weekend, it was reported that Disney’s current market cap is $262 Billion. That makes it bigger than the five biggest banks in Europe: BNP, Santander, ING, Intesa, and Credit Agricole.

Now it is questionable whether or not Disney will stay at this point, but this once again shows the absolute might of this company. Some people may look at this empire and fear a monopoly, but they shouldn’t worry. Instead, we should look in awe at the fact that this empire started in a small one-desk garage. It is an inspiring feat made possible by American ingenuity and American free enterprise.

Walt probably did not expect his company to grow to this size. But he planted the seeds for something that is seen as truly impossible. And all of this really was started by a mouse. How awesome is that?

What do you think about Disney’s size and value? Do you think they can stay at this level of success? Let us know in the comments!

Comments Off on “It was all started by a mouse” – But how big is The Walt Disney Company?