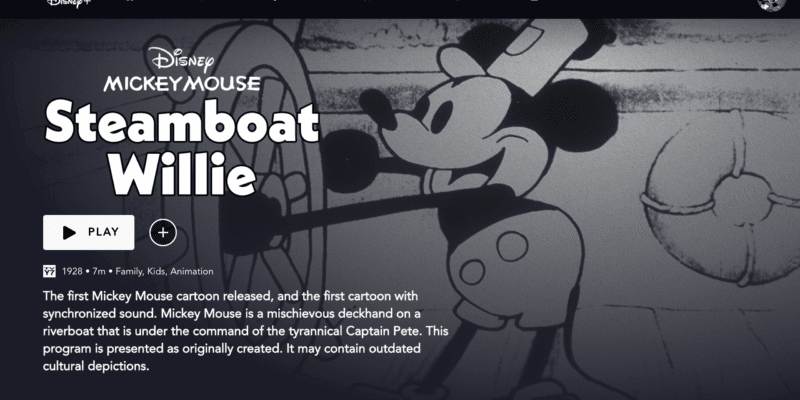 “I hope we never lose sight of one thing: that it was all started by a mouse.” -Walt Disney.

Today, Mickey Mouse turns 91. While he’s now well on his way to 100, I’m sure we all wish we could be on our way to Disneyland, Walt Disney World, or any other Disney Park to help him celebrate his big day. but now that Disney+ is here, we can help him celebrate from the comfort of our own home.

When The Walt Disney Company poured the Disney Vault treasures onto Disney+, several Mickey Mouse cartoons were added in a category called “Mickey through the years.” And we can’t think of a better way to celebrate Mickey’s birthday around the world than by going back and reliving some of his greatest adventures.

Here are a few of the Mickey cartoons you will find there:

First on the list is the very first cartoon with synchronized sound. Released in 1928, “Steamboat Willie,” revolutionized the animation industry and brought Mickey Mouse into our hearts. It has become the icon of Walt Disney Animation and continues to touch the hearts of any Disniac. We are also introduced to Minnie Mouse and Pete.

Time to follow that first with another first. Released in 1935, “The Band Concert” was the first Mickey Mouse cartoon to be in full color. It was also one of the first cartoons to feature Donald Duck. A lot of the gang makes an appearance in this short, including Goofy, Horace, and Claribel. The ragtag group is putting on a concert in the park when a giant tornado crashes the party. But despite being carried off wizard-of-oz-style, each band member continues to play their part.

It’s been almost a month since Halloween, but this classic short is timeless. One of the many shorts to feature Mickey, Donald and Goofy teamed up for some scheme, their startup “Ajax Ghost Exterminators,” responds to a house call which was put in by the house ghosts themselves looking to have some fun. This short is filled with classic slapstick comedy, practical jokes, and ghostly animation techniques that were extremely revolutionary at the time.

The masterpiece that combines Disney animation with impressionistic music. Fantasia features Mickey Mouse as the iconic Sorcerer’s Apprentice. Many Disniacs can probably still hear the marching instrumental that played as Mickey guided broomsticks to take care of a chore he did not want to do himself. But this lowly apprentice will learn a lesson in the end. The blue and white sorcerer’s hat is still a popular icon across Disney parks and Sorcerer Mickey comes to the rescue in shows such as Philharmagic and Fantasmic.

In this collection of shorts, we find Mickey, Donald, and Goofy in a retelling of “Jack and the Beanstalk.” The trio is lifted to a castle in the heavens overnight by a magic beanstalk where they must confront a giant and rescue a golden harp to save the kingdom of Happy Valley from drought and famine. The voice of Mickey since “Steamboat Willie” was done by none other than Walt Disney himself, and it would continue to be so until Walt’s death.

Though this is dubbed a Pluto short, this is still one of the most popular classic Mickey Christmas shorts. Here we see Mickey–still voiced by Walt Disney–take Pluto out on a walk to chop down their Christmas tree. From Mickey’s perspective, everything seems to be fine, but Pluto is not so oblivious. Mickey accidentally chops down Chip n’ Dale’s tree and Pluto doesn’t like having these little critters invade his home. This short is filled with gorgeous holiday animation, hilarious Chip n’ Dale antics, and the message that we should be kind to everyone. Especially at Christmas.

Sticking with the Christmas theme, Mickey’s Once Upon a Christmas is another great way to get into the spirit of the Holidays. In this collection of shorts, Mickey, Minnie and Pluto put on a retelling of “The Gift of the Magi.” Featuring Minnie’s expert gift-wrapping skills and Mickey’s showstopping harmonica playing, the two realize that no gift will ever be as grand as the love they share with each other.

Okay, we can’t talk about Mickey Mouse without mentioning Mickey Mouse Clubhouse. This Disney Junior show features Mickey Mouse and all his pals as they bring kids on a problem-solving adventure where they’ll have fun while learning a thing or two. Debuting in 2005, this is one of the first times we’ve seen Mickey Mouse and his friends consistently in the computer animation format.

Since 2012, Disney’s Mickey Mouse has revitalized the Mickey Mouse cartoon shorts with a modern twist. While Disniacs will debate if the changes in animation style were a good choice–especially with the changes to Goofy–each episode of this series tells a new Mickey Mouse adventure in less than 10 minutes. These shorts are stocked with Disney Animation and Park references. They feature European villages dressed in Mary Blair’s “It’s a Small World” style and obscure character features from the Matterhorn Yeti to Willie the Whale. These shorts also go around the world, and episodes are presented in Spanish, French, Italian, Dutch, Korean, Japanese, and Hindi.

What are your favorite Mickey Mouse cartoons? What do you think is next for our favorite Mouse? Let us know in the comments!