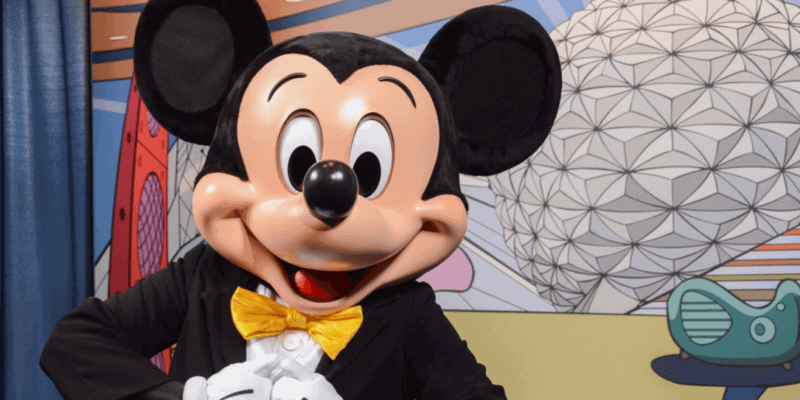 If you’re planning on meeting Mickey Mouse on your next Walt Disney World trip, keep this in mind. Disney is moving his meet-and-greet location to another area of the popular Epcot theme park due to construction currently underway.

As many Disney fans know, Epcot is currently undergoing a huge transformation. The popular Disney Park is getting new attractions, restaurants, and atmospheric additions, and much of the construction is occurring in Future World, which will be transformed into three new lands: World Discovery, World Celebration, and World Nature.

Guests of Epcot were previously able to meet the main mouse himself, Mickey, as well as other members of the Fab Five like Minnie Mouse and Goofy at the Epcot Character Spot in Future World. This air-conditioned location was highly popular for meet and greets and a must-do for Disney fans, whether it was their first time visiting Walt Disney World or their one hundredth. But due to the extensive renovations at this theme park and the overhaul of Future World, the Mickey Mouse meet and greet location is moving.

Don’t worry, though. Just like at the other three Walt Disney World theme parks, guests will still be able to meet Mickey Mouse at Epcot. Only now, he’s moving to another area — the Imagination! pavilion. Here’s what Disney had to say in the recent announcement of Mickey Mouse’s move that was shared on Friday:

The exciting transformation of Epcot has begun, with groundbreaking attractions and other unforgettable experiences debuting in the coming months and years. Among them will be new places to meet and interact with some of your favorite Disney characters, including Mickey Mouse himself!

Mickey will soon be making appearances in a new location at the Imagination! pavilion, as part of the Disney & Pixar Short Film Festival. Just inside the entrance, you’ll discover Mickey greeting his fans and celebrating his on-screen stardom.

Mickey’s imagination has led to a career in the movies for 90 years and counting, featuring roles in dozens of short films such as “Get A Horse” which you can enjoy as part of the festival. Look for Mickey to arrive at the Disney & Pixar Short Film Festival in early 2020!

At this time, it’s unclear where Mickey Mouse will be meeting guests after the Epcot transformation is complete. But for now, guests can look forward to meeting him in the Imagination! pavilion at Epcot.

If you’re visiting the three other theme parks at Disney World, you can meet Mickey at Town Square Theater in Magic Kingdom, safari gear Mickey at Discovery Island at Disney’s Animal Kingdom, and Sorcerer Mickey at Commissary Lane at Disney’s Hollywood Studios. You can even meet Mickey and friends at several character dining locations at restaurants throughout Walt Disney World property, like Tusker House in Animal Kingdom, Garden Grill at Epcot, ‘Ohana at Disney’s Polynesian Village Resort, and Chef Mickey’s at the Contemporary Resort.

Planning a trip to Walt Disney World? The Authorized Disney Vacation Planners at Academy Travel can help. Let Academy Travel handle all the details of your Disney vacation, from booking FastPass+ and dining reservations to your resort hotel. Click here for a free, no-obligation quote from Academy Travel!

Are you excited to meet Mickey Mouse in a new location at Epcot? Let us know in the comments!