Mickey’s Toontown Fair debuted at Walt Disney World’s Magic Kingdom in 1988 as the temporary “Mickey’s Birthdayland” and more than 22 years and a few name changes later, it closes permanently today to make way for the circus.

In 2012, as part of the New Fantasyland expansion, Mickey’s Toontown Fair will become Storybook Circus, featuring the highly-anticipated double Dumbo and a revamped roller coaster. Little is known about what else will be featured in Storybook Circus, though new preview posters hint at what we can expect. But today is not about looking to the future, but rather about reminiscing about the time we have spent with Toontown. 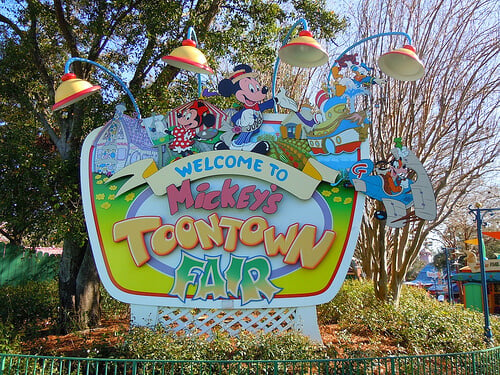 I visited Mickey’s Toontown Fair for the final time on Wednesday, armed with my usual still camera as well as a GoPro HD Hero to get some fun wide-angle photos and video.

Take a video walk with me on an overview of all that Toontown has had to offer, including Mickey and Minnie’s houses, Goofy’s Barnstormer roller coaster, Donald’s boat, the Disney Fairies meet and greet, and even the Walt Disney World Railroad:

We’ll explore the houses and roller coaster below, but first I wanted to share a few favorite photos from Donald’s Boat and the rest of Toontown: 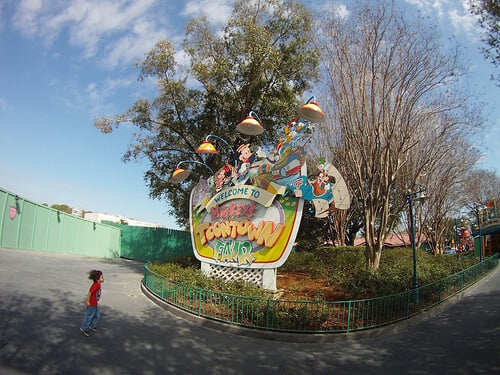 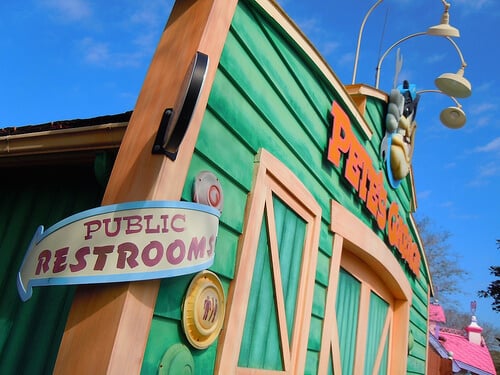 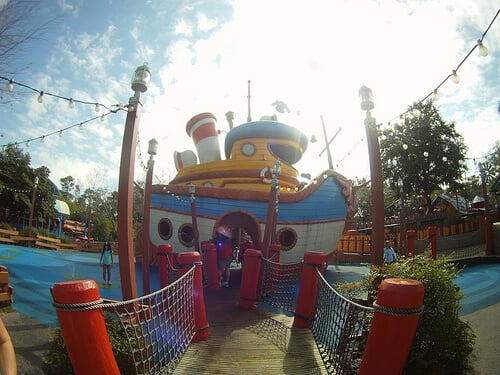 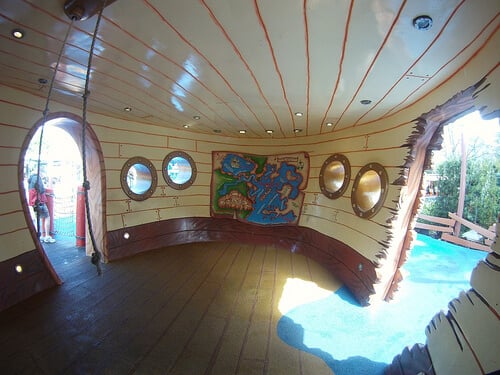 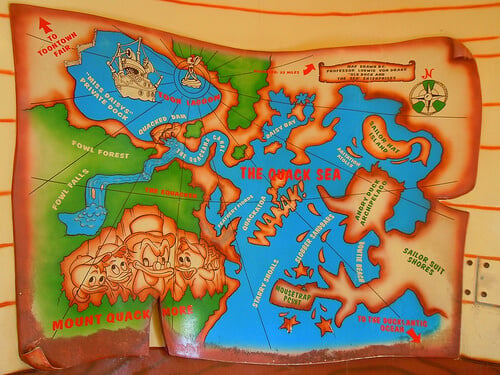 The Pixie Hollow meet and greet is a relatively new addition to Toontown, within the last few years. The Fairies will be moving to Epcot for the International Flower and Garden Festival in the coming weeks: 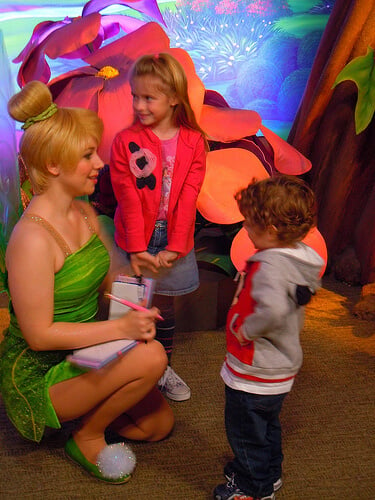 Toontown has also been home to the Disney Princess meet-and-greets, but they will move to the new Princess Fairytale Hall when it opens in Fantasyland in 2012. In the meantime, Princesses will be found in Adventureland.

I was never a regular visitor to Mickey’s Toontown Fair, but the occasional stroll through was always enjoyable if for nothing else than to observe the architecture featuring no right angles. 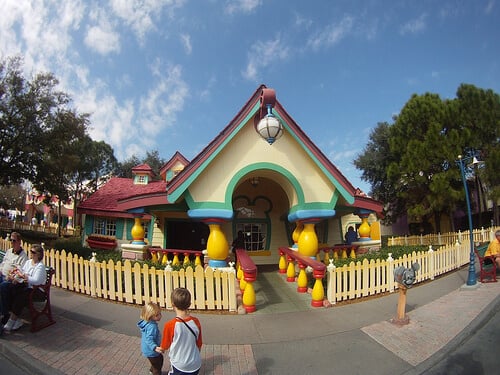 The two locations that will be most-missed when Mickey’s Toontown Fair becomes Storybook Circus are the houses of Mickey and Minnie Mouse. The pair will be relocated to Exposition Hall in Town Square, at the front of the park, where their new home will be an elaborate meet-and-greet.

But Mickey’s House has always been home to a fun walk through attraction, free of lines, allowing visitors to explore at their leisure.

Take a final walk-through of Mickey’s House, with up-close looks at artwork and decorations:

The wide-angle lens works wonders in this small space, allowing entire rooms to be captured in a single frame. 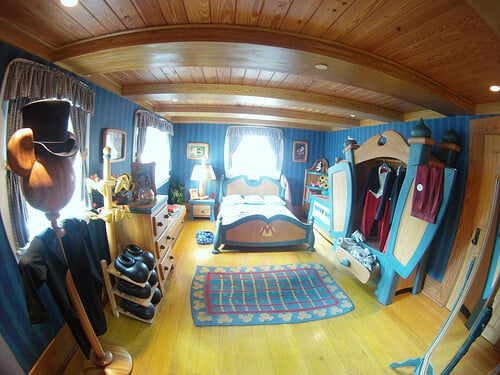 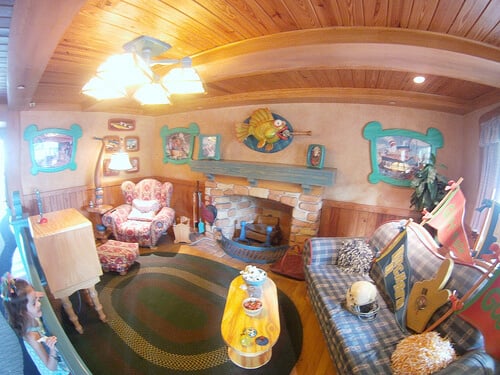 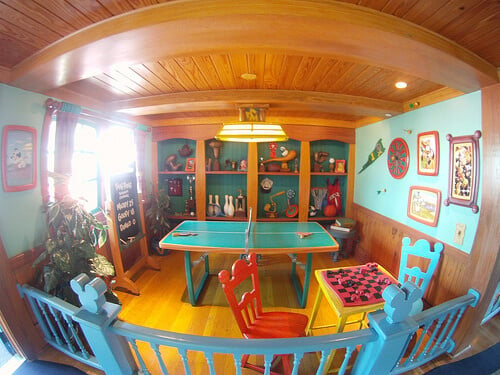 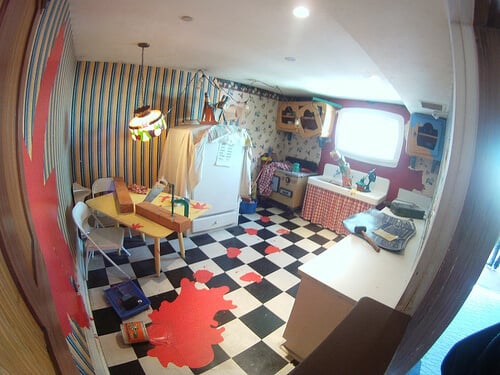 The kitchen remodeling has taken quite a while: 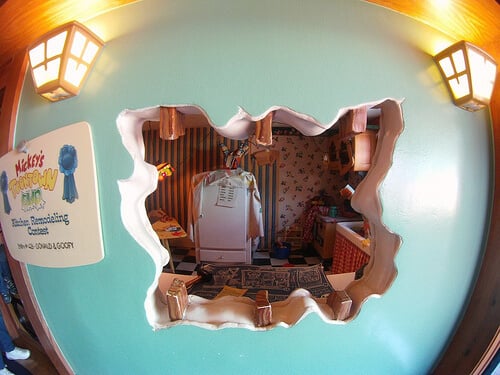 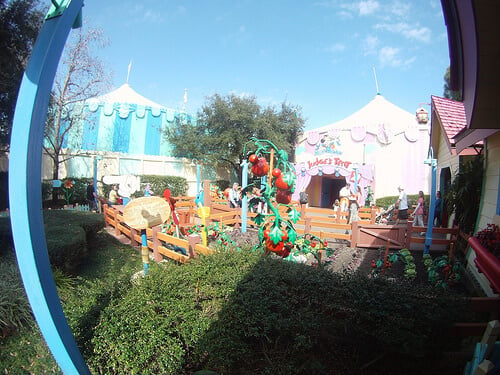 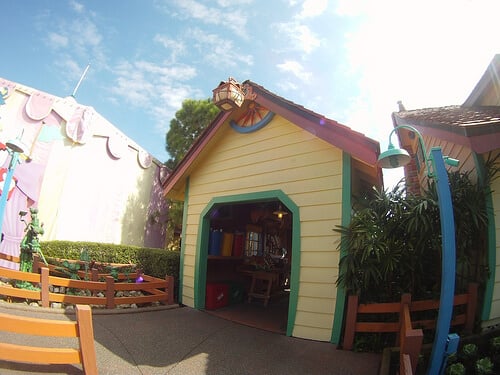 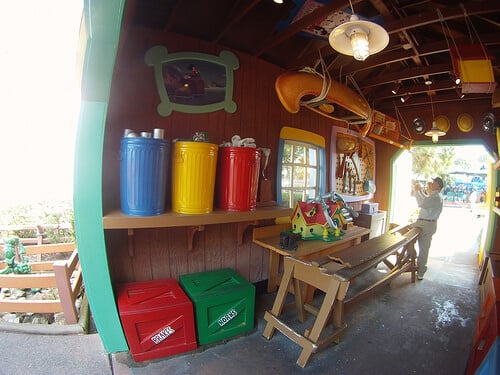 Great detail inside Mickey’s garage is the scale model of his own house: 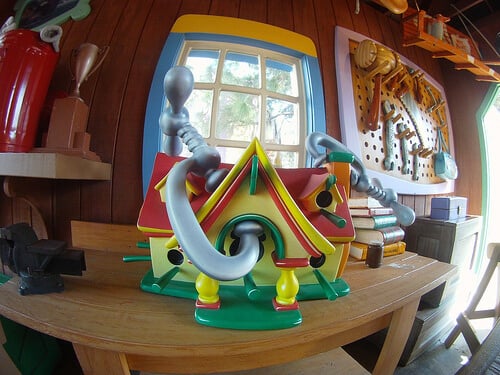 It will be much easier to find Mickey Mouse and his pals for photo opportunities once they move to the front of the park. In Toontown, guests had to travel through the Mouse’s house and into the Judge’s Tent, wait in line, and eventually find their way in a back room for a quick picture: 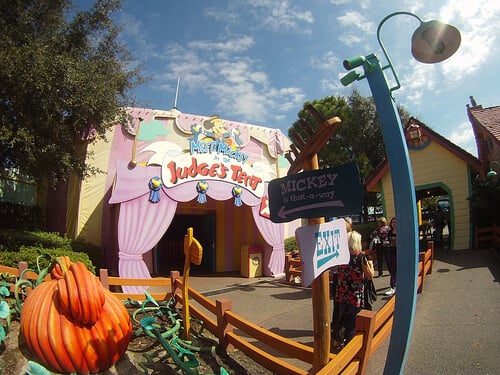 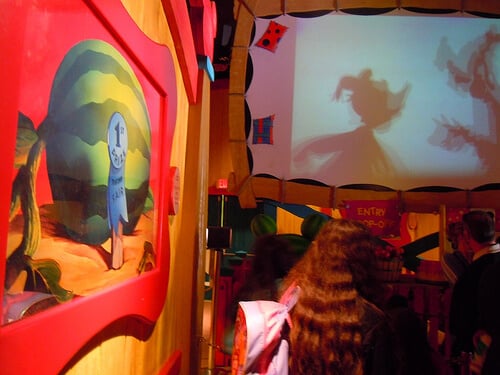 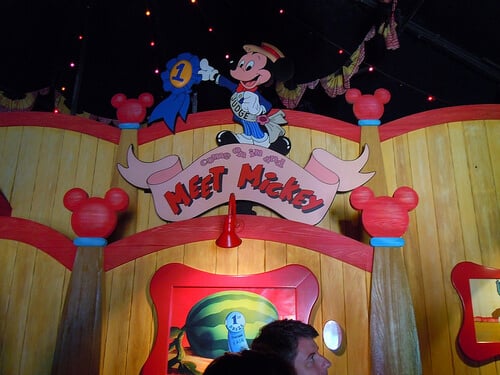 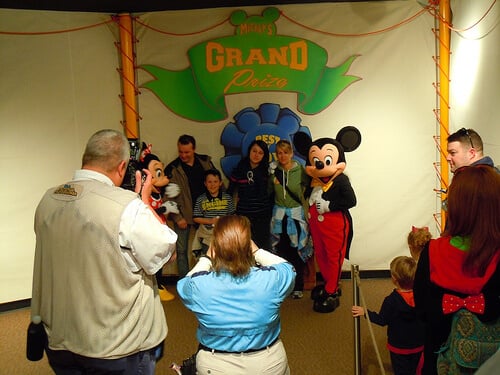 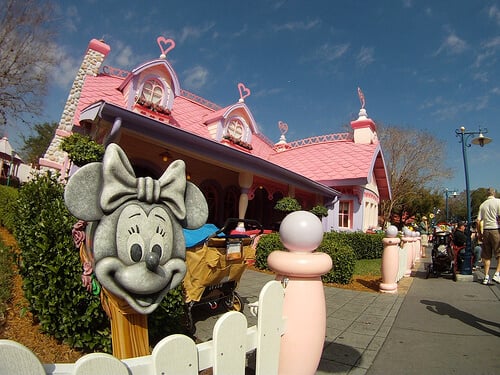 Minnie’s house has always been a favorite among children, largely due to her highly interactive kitchen featuring popcorn popping and a cake magically rising in the oven.

Take a walking tour of Minnie’s house in this video, with a closer look at these and other fun details: 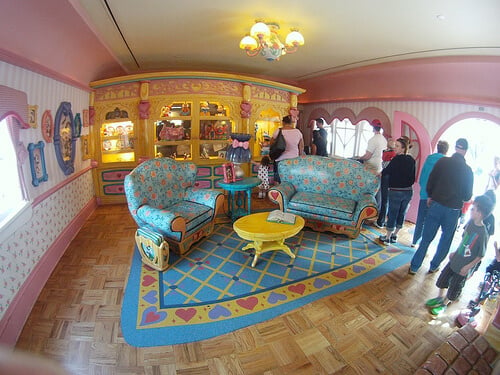 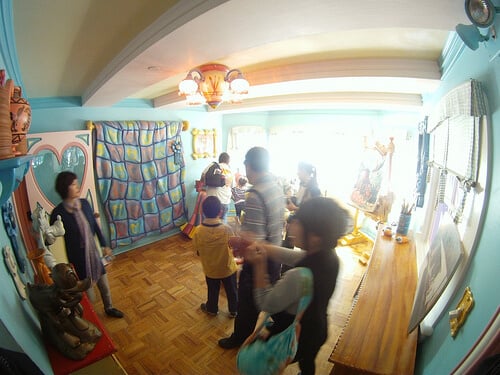 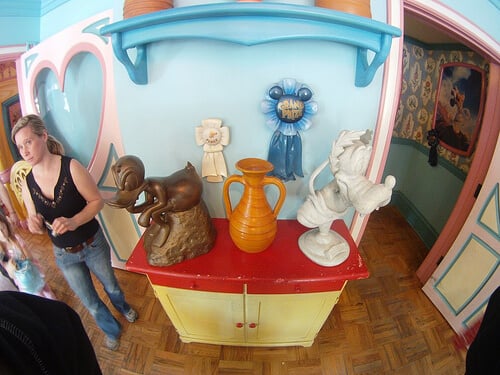 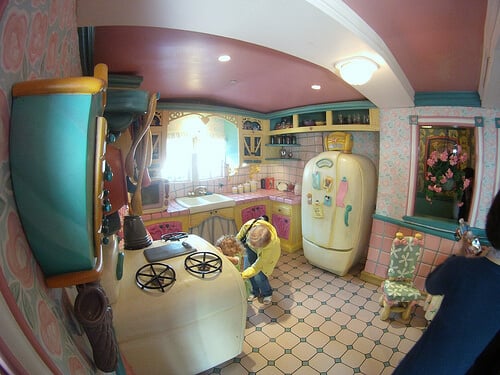 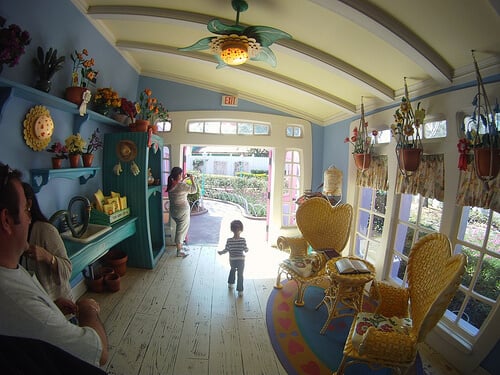 The Barnstormer at Goofy’s Wiseacre Farm 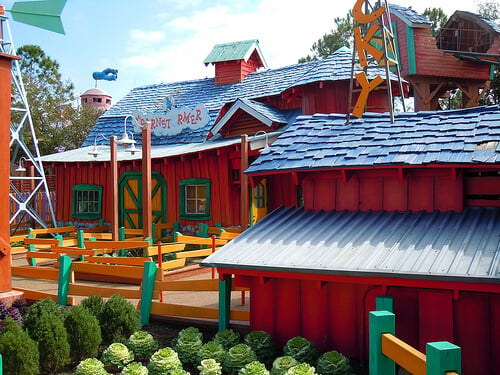 For kids who aren’t quite tall enough to ride Disney’s mountain range of roller coasters, Goofy’s Barnstormer has been the perfect way to enter the world of thrill rides at an early age. The ride will stick around after Toontown is gone, to be themed as The Great Goofini as part of Storybook Circus. But its barn-storming theme will remain in the memories of those who have enjoyed it over the years.

The Barnstormer queue features a surprisingly large number of fun details that can easily be overlooked by guests eager to just get on the ride.

Join me for a walk through the queue and watch a ground-level view of a full cycle on the track:

First, take a first-person POV trip around the track in the front row:

Next, hop in the second-to-last row for a wide-angle flight around the Barnstormer from a different vantage point:

I wonder what will happen to those chickens when Storybook Circus comes to town. Hopefully, they stay clear of the deep fryer.

Mickey’s Toontown Fair has been a hit among Disney’s littlest guests for many years, allowing them to run, play, and explore unique, highly detailed, and interactive environments. But adults traveling with older or no children often steer clear of this kid-oriented land. It’s been easy to miss, tucked away in a back corner of the Magic Kingdom. It’s not completely clear what audience Storybook Circus will cater to. But what began as a temporary land celebrating Mickey Mouse’s birthday will now evolve into a permanent home to an enhanced version of one of the Magic Kingdom’s classic attractions, cementing it as part of the park’s future history.