Building on the basics of the Mobile Magic app, Walt Disney World today released a new free app called “My Disney Experience.” The new mobile application not only offers an enhanced way for Guests inside and out of Disney’s Central Florida theme parks to check ride and show wait times, browse maps, and make dining reservations but will also eventually link to Disney’s NextGen Fastpass system.

A simple My Disney Experience loading screen greets those who launch it: 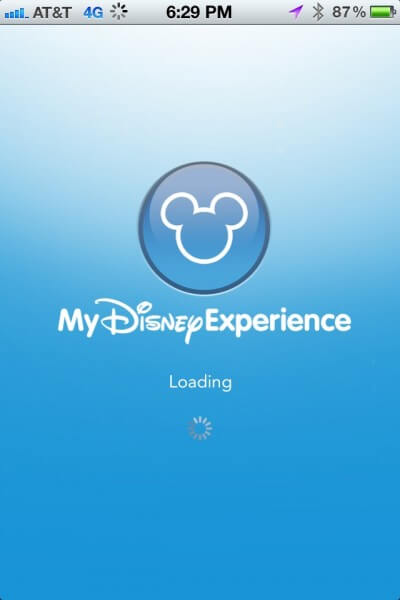 From there, users can browse a map of Walt Disney World, including all four of its theme parks, explore attractions, shows, and parks via lists, make dining reservations throughout the Walt Disney World Resort, and search. The iPad version looks especially stunning, with high-resolution photography complimenting the larger screen, providing more room for more easily accessible features. 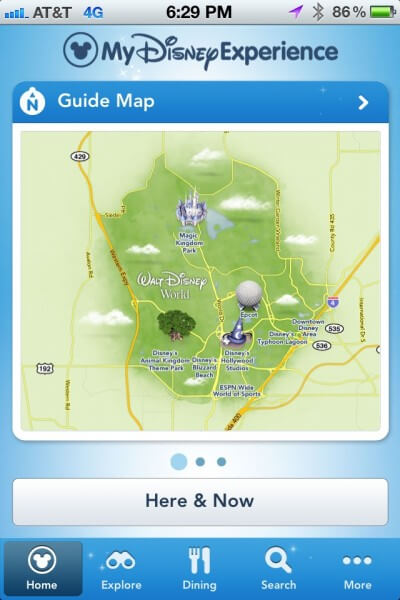 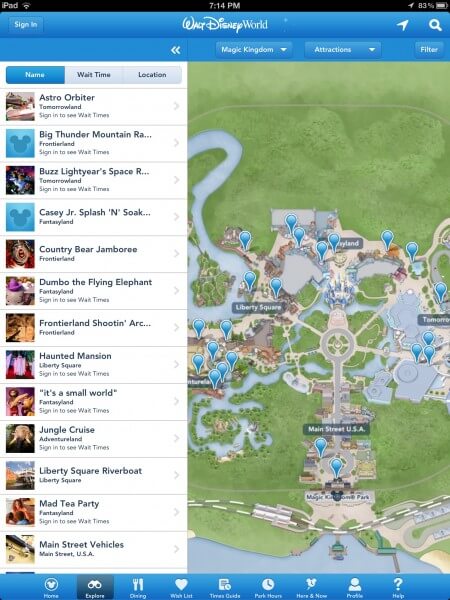 But while checking park hours and knowing the wait times for attractions is wonderfully helpful information to have, the most interesting part of the “My Disney Experience” app is found on its sign-in screen: 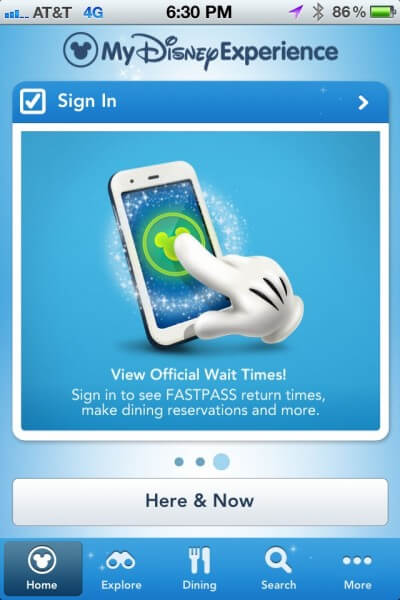 The Mickey head in a glowing circle should look familiar to those following Disney’s NextGen testing. Disney used that same symbol to mark the RFID readers on the turnstile-free entry tests at EPCOT last year and the more recent RFID-based Fastpass testing at the Magic Kingdom, a program that will continue testing later this month. This second wave of NextGen Fastpass testing will somehow link to the new “My Disney Experience” app, allowing Guests, as the screen above shows, to check Fastpass return times on their mobile devices while using Disney’s new in-park free Wi-Fi.

Attempts to use this section of the app were immediately thwarted upon signing in with my Disney login, returning me to the home screen. The feature is not yet ready for use by everyone as Disney is just beginning its testing.

Elsewhere in the app, away from the NextGen bits, a handy “Here & Now” button will immediately show users what’s around them while they’re at the Walt Disney World Resort. But outside the area, that featured is “locked”: 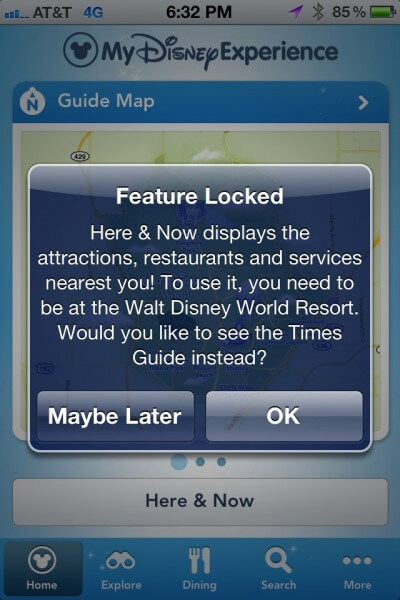 Much of the park-related data throughout the app is still accessible by browsing through maps and lists, such as park hours, attraction locations, and a times guide: 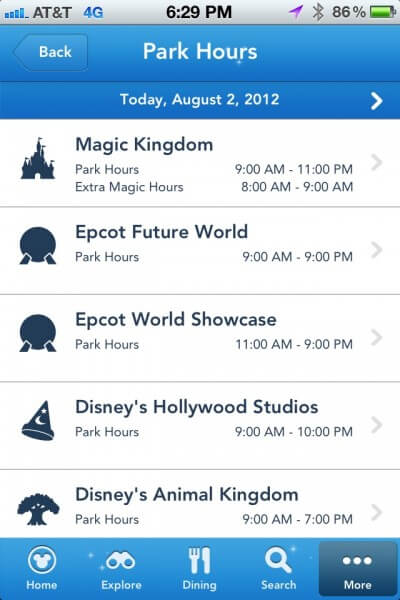 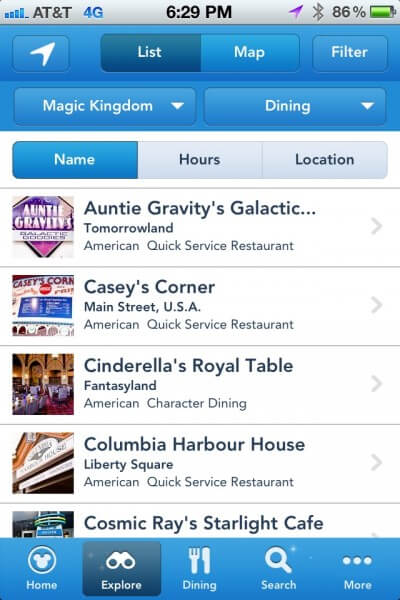 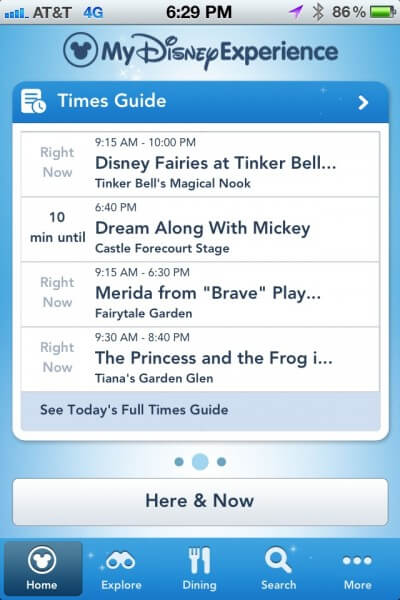 Zooming in on the park maps reveals detailed renderings of its buildings and scenery, each of which can be tapped on to find out more information, including wait times, like in the case with The Haunted Mansion here: 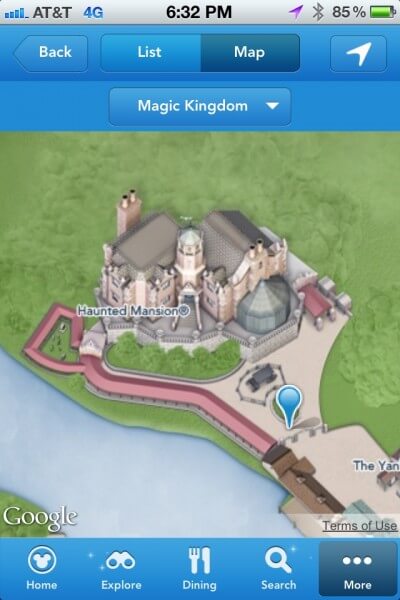 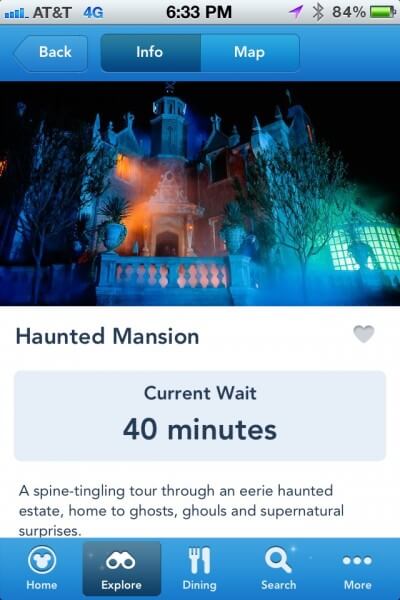 Information about character meet-and-greets and entertainment can also be found in the app: 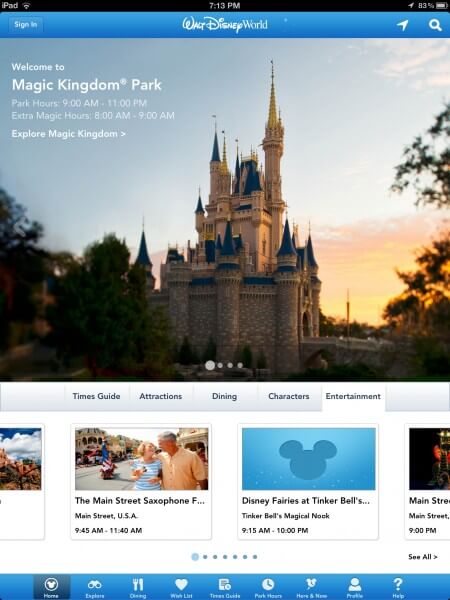 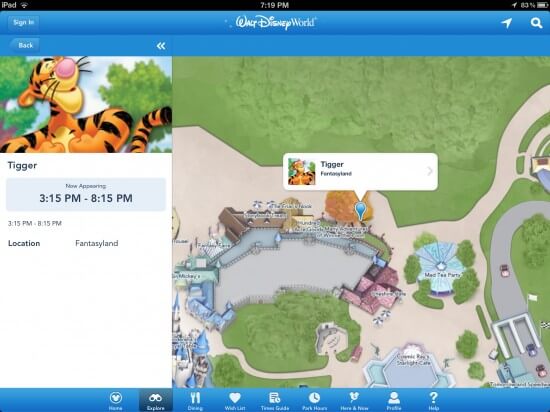 Dining reservations can also be made through searching by restaurant name, location, or experience/cuisine and are linked to a name, Disney login, and telephone number: 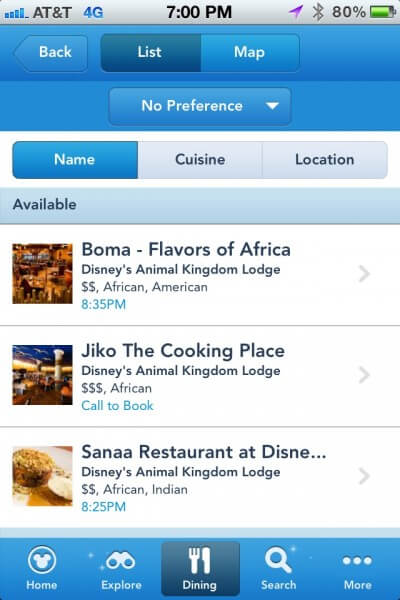 The Mobile Magic app, a partnership between Disney and Verizon, is still available in the iTunes store and provides information for Walt Disney World and Disneyland.

But “My Disney Experience” provides a cleaner interface and the promise of many more advanced features to come, exclusively for Walt Disney World Guests for the time being.

You can download “My Disney Experience” now for free via iTunes for iPhone and iPad. No Android version is available yet, but it likely will be in the future if Disney follows the trend set by Mobile Magic, which began on Android devices and was eventually ported to iOS.