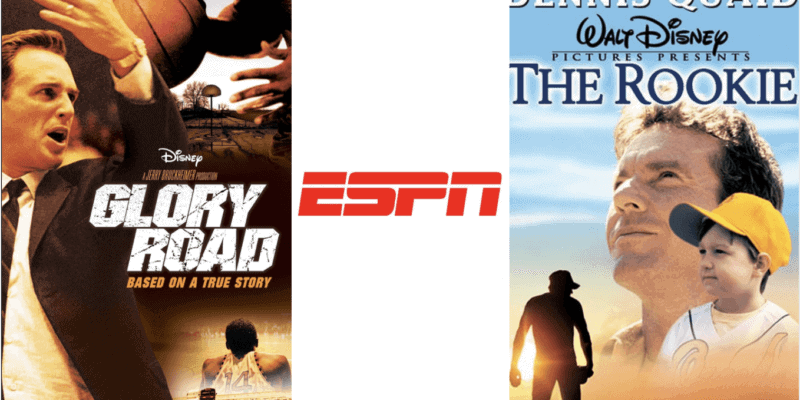 If you’re a sports fan, you may have noticed that ESPN has been airing more than its fair share of games that even the most avid viewers don’t really care about (in desperation, we watched the 1995 Big Ten title game a few nights ago). With nearly every pro-sports season suspended or cancelled amid the current coronavirus pandemic, though, ESPN couldn’t continue this way for months.

As you may know, the Worldwide Leader in Sports is part of the Disney family of companies. It seems that ESPN executives have decided to take advantage of this and begin airing Disney movies in place of sports. This seems like a smart move. It’s certainly better than dead air and probably better than most of the match-ups lurking in their archives.

On Friday night, since we won’t be watching the MLB’s Opening Week, fans can catch The Rookie, which tells the story of Jim Morris’s (Dennis Quaid) unlikely rise to the major leagues following a shoulder injury 12 years prior. The feel-good film released in 2002 and is the perfect family movie.

Sports fans will also be able to catch other Disney sports films, including Secretariat, The Greatest Game Ever Played, Miracle, and Invincible, on ESPN in the upcoming weeks. No major sports organizations, including the MLB, NBA, and NCAA, have announced when their regular scheduled games will resume. It is worth noting that the NFL still plans to hold its annual draft beginning April 23, though no fans will be allowed to attend.

Since we’re without sports for the foreseeable future, we might as well make the best of the situation. Pop some popcorn, grab your family, and settle-in for ESPN movie night!

Will you be tuning into ESPN for Disney films? Let us know which one you are looking forward to in the comments.

Comments Off on In the Wake of Cancelled Sports Seasons, ESPN Will Air Disney Movies!