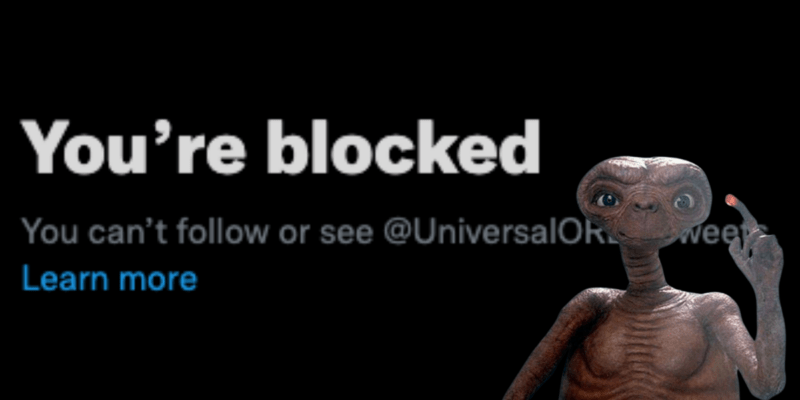 Universal Orlando Resort’s Twitter account is always a good source for comedy. The account does a fantastic job at bringing their community together with jokes relevant to the Park and current things happening within the theme park community.

Now, Universal strikes again — and you bet we want to talk about it! E.T. Adventure is a Universal attraction that has been at Universal Studios Florida since June 7, 1990, the day the Park opened. The attraction is a dark ride that allows Guests to fly through the sky on their own bike, just like they see in the film. It also extends past the Steven Spielberg movie by showing Guests what E.T.’s home planet looks like.

The queue for the attraction is also one of the best at Universal, even though it is the oldest. Guests immerse themselves into a forest before the ride begins, with smells surrounding their senses at every turn. Considering the ride is still at the Park, it is no surprise that Universal is a big fan of the little alien!

Universal Orlando Resort (@UniversalORL) recently Tweeted that they will block you if you are not a fan of E.T.!

The Tweet was joined with a “You’re Blocked” screenshot that paired hilariously with the wording. We have not yet seen Universal actually take action on this, as it is clearly a joke, but I personally would not be too surprised to see them actually block someone who said they hate E.T. to prove their point!

Universal’s Twitter account typically pokes fun at its biggest competition, Walt Disney World Resort quite often. The most recent jab came after EPCOT debuted Space 220, which makes use of screens to simulate space. Universal noted that Guests could just come to the NBC sports bar at CityWalk, which has giant screens as well.

At the 50th anniversary at Disney World rolls around, we will surely get to see more fun pop out of Universal’s social media team with the friendly competition.