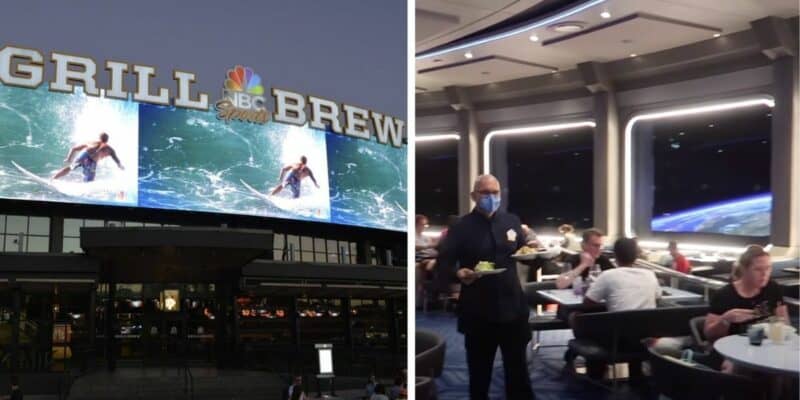 Yesterday, we saw the official grand opening of Space 220 at EPCOT. Walt Disney World Resort has been updating its theme parks ever since 1971 to ensure that Guests always enjoy the ultimate and most magical experience.

Now, EPCOT has been gaining a significant overhaul. One of the big changes that we have seen is the renovations in Future World. Although that section of the Park is still not ready, new things have opened in the Park, which gives Guests more excitement for what is to come and adds some patience, as there is more to do. Space 220 is a restaurant like no other as it blasts Guests in a simulation elevator up 220 miles into space. Then, Guests get to dine in what looks like a spaceship!

Of course, Guests are not actually in space, but the surrounding screens, which act as windows, do help after to the immersive theming that Disney Imagineers worked to accomplish. Since social media was flooded with talks about the location, it was only fitting that Universal Orlando Resort would chime in with a slight and funny dig towards Disney.

Universal’s (@UniversalORL) Twitter account constantly pokes fun at Disney, keeping up the friendly competition that exists between the theme Park moguls who are minutes away from each other. With everyone fawning over Space 220, Universal stated:

If you want to eat and look at giant screens, have we got a restaurant for you.

If you want to eat and look at giant screens, have we got a restaurant for you. pic.twitter.com/Q0AzhDOxR6

If you have ever walked down CityWalk, you have indeed seen the massive screens in front of the NBC sports bar. It is huge and usually has different sports playing. Considering Space 220 also uses giant screens, it is clear Universal was comparing their location to Disney’s and noting that they did it first!

Of course, the two locations are incredibly different. Still, Universal’s social media team does a great job engaging with Guests online and always finding a way to be the group’s clown!

What do you think of Universal’s little dig towards Disney?