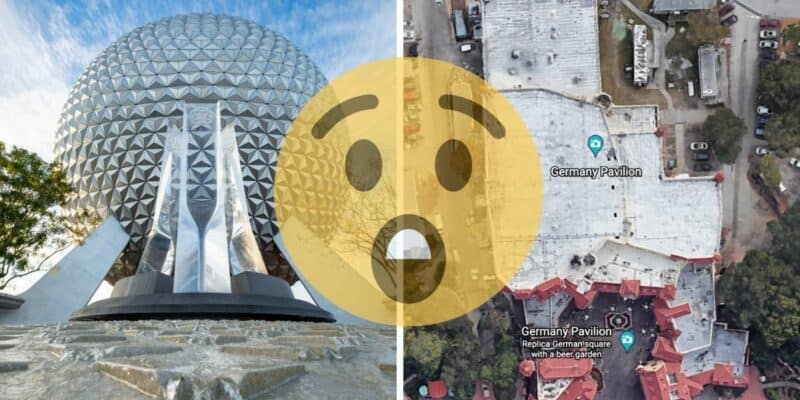 EPCOT is home to several attractions, but did you know that Disney had originally planned for two other attractions to be located inside World Showcase. In fact, the show buildings for the rides were built and can still be seen today!

Let’s dive deeper into what “could have been” at EPCOT’s World Showcase.

The first ride was going to be located in the Germany pavilion. Rhine River was designed to be a boat ride and would, according to the Walt Disney Company’s 1976 annual report, take Guests on a cruise down Germany’s most famous rivers — The Rhine, the Tauber, the Ruhr, and the Isar.

There was also another ride planned for Germany — the Matterhorn Bobselds (just like Disneyland), even though they are actually located in Switzerland.

Disney moved forward with building the Germany pavilion; however, Disney never went through with constructing the ride itself. Though if you look at the pavilion on Google Earth you can see that they did build a show building for the planned ride, which remains there today. You can see the show building in the image below.

And if you actually visit the pavilion on your next trip to EPCOT, you will find ride remains including the ride entrance gate and foyer, which is located to the right of the Biergarten entrance.

There were actually a few attractions that have been proposed for the Japan pavilion. In fact, one show building was even built, but it remains left unused as none of the planned attractions were completed. You can see the show building thanks to Google Earth in the photo below.

Some of the planned attractions included an indoor roller coaster based on Japan’s Mount Fuji. It was going to be designed similar to Matterhorn Bobsleds at Disneyland and would’ve included a replica of Mount Fuji! Imagineers discussed including Godzilla or a large lizard which would “attack Guests in their cars”.

Another attraction that Imagineers proposed for the Japan pavilion was a walk-through version of “Circle-Vision”. Guests would have boarded a replica of a bullet train and looked through windows, which were actually film screens, which showcased Japan’s changing landscapes. The train itself would have shaken to make it feel as if the train were really moving through the countryside.

Imagineers also considered Meet the World (which is now in Tokyo Disneyland); however, this idea didn’t even make it past the planning stages. The show building was built, but due to design and the rotating theater planned, there were too many miscalculations, causing stress and the ultimate decision to move forward without the attraction. The space is currently being used for rehearsals and storage.

And on October 1, the France pillion will be home to another attraction — Remy’s Ratatouille Adventure.

Did you know that EPCOT was supposed to have two more rides located inside World Showcase? Let us know in the comments below.